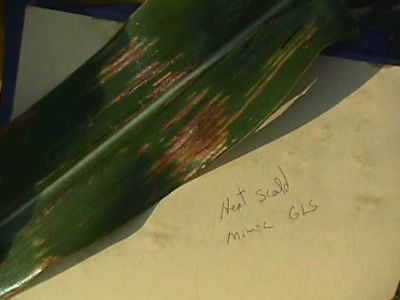 Have you ever seen a plant spontaneously form lesions, despite there being no obvious sign of injury? These seemingly out-of-nowhere cases are known as lesion mimic mutants and are common in plant species, with more than 50 being identified in the corn genome alone.

Lesion mimic mutations do not occur at high frequencies so symptoms will often appear on an individual plant that is surrounded by unaffected plants. Symptoms appear similar to those of a residue-borne foliar disease, beginning on the lower leaves and spreading up the plant. Saturated soils and environmental stresses tend to increase the chances of lesion mimic mutants and symptoms are seen more frequently in corn following corn and in irrigated fields.

Hybrid genetics can have a large influence on the expression of lesion mimic mutants, although symptoms have been observed in numerous hybrids from multiple seed companies.

Because mimic mutant symptoms are caused by genetic mutation and not a fungal pathogen, fungicides have no effect. A diagnostic lab can test a sample to determine whether or not the symptoms are due to a pathogen. Accurate identification can prevent unnecessary and ineffective fungicide applications.

Yield impact will vary based on the amount of leaf area affected on each plant.