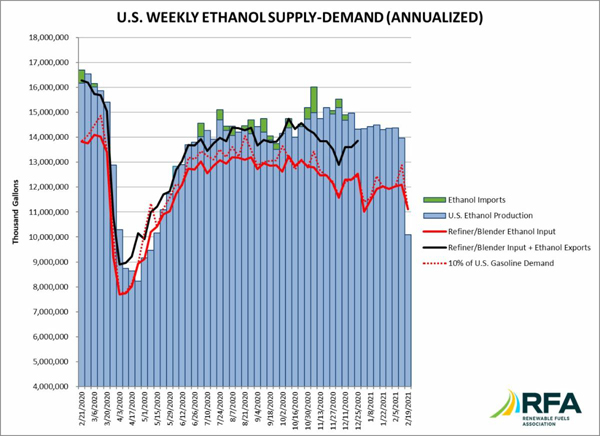 This morning, the EIA released its Weekly Petroleum Status Report for the week ending February 19. Estimates were affected by the polar vortex that hit most of the country last week and led to major disruptions to infrastructure in Texas.

According to data analyzed by the Renewable Fuels Association, ethanol production plummeted 27.8%, or 253,000 barrels per day (b/d), to 658,000 b/d-equivalent to 27.64 million gallons daily and the lowest output since May 8, 2020. This was the largest week-over-week drop on record. Production remained 37.6% below the same week last year. The four-week average ethanol production rate fell 7.4% to 860,000 b/d, equivalent to an annualized rate of 13.18 billion gallons (bg).

Ethanol stocks sank 6.2% to an 11-week low of 22.8 million barrels, which was 7.8% below a year-ago. Inventories drew down across all regions, including a sizable decrease (down 1.05 million barrels) in the Midwest (PADD 2).

Refiner/blender net inputs of ethanol declined 8.1% to 725,000 b/d, equivalent to 11.11 bg annualized. This was 19.6% below the year-earlier level as a result of both the weather and the continued impact of the COVID-19 pandemic.

There were zero imports of ethanol recorded for the week. (Weekly export data for ethanol is not reported simultaneously; the latest export data is as of December 2020.)