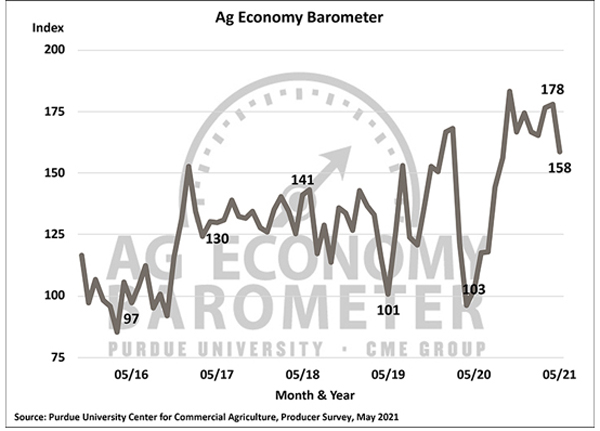 The Ag Economy Barometer declined 20 points in May to 158 which is the lowest barometer reading since September 2020 when the index stood at 156. Both the Index of Current Conditions and the Index of Future Expectations declined this month. The May Current Conditions Index fell to 178, 17 points lower than a month earlier, while the Future Expectations Index of 149 was 20 points below its April reading. The Ag Economy Barometer sentiment index is calculated each month from 400 U.S. agricultural producers’ responses to a telephone survey. This month’s survey was conducted from May 10-14, 2021.

The Farm Capital Investment Index also declined this month with the index falling to 65, down 10 points from a month earlier. Since peaking in December and January at 93, the investment index has fallen 13 percent although it remains 30 percent above its May 2020 reading. When asked more specifically about their plans for farm machinery purchases, there was a shift away from producers saying they expect to keep machinery purchases in the year ahead ‘about the same’ to ‘lower’ while the percentage of producers planning to increase purchases was unchanged from April. This month’s survey included a new question focused on producers’ plans to construct new buildings or grain bins. Fifty-nine percent of respondents said their construction plans for the upcoming year are lower compared to a year ago and just 28 percent of producers said their construction plans were about the same as a year ago. Both of these response categories were more negative for construction than for farm machinery purchases suggesting that construction plans are an important driver in the Capital Investment Index’s recent weakness.

After declining last month, the Long-Run Farmland Value Expectations Index rose 10 points to a record high reading of 158 in May with two-thirds of producers in the survey saying they expect farmland values to rise over the next five years. The Short-Run Farmland Value Expectations Index remained near its record high, falling just 2 points below the record high set in April of this year. So, despite the less optimistic outlook depicted by the Current Conditions and Future Expectations indices, producers remain very bullish on farmland values.

Producers’ expectations for good vs. bad times in U.S. agriculture have undergone a marked shift. For example, in May just 27 percent of respondents said they expect good times in U.S. agriculture during the next five years, the lowest reading in the survey’s history and down 12 points from a month earlier. A driver of this shift appears to be a large divergence in expectations for the crop vs. the livestock sectors in the upcoming five years. This month over half (54%) of respondents said they expect widespread good times for the crops sector in the next five years whereas just one-fourth (26%) of producers said they expect widespread good times for the livestock sector. The difference in expectations for these two principal sectors of the ag economy could help explain why producers appear to be very bullish about farmland values and cash rental rates while at the same time expressing less optimism about both current conditions and future expectations for the ag economy overall.

Producers remain very concerned about possible changes to U.S. tax policy. In a series of questions first posed last month, survey respondents confirmed that changes in tax policy being considered will make passing their farm on to the next generation more difficult (78% very concerned). Additionally, 83 percent of producers expect capital gains tax rates to rise over the next five years, 71 percent are very concerned about a possible loss of the step-up in cost basis for inherited estates and 66% say they are very concerned about a possible reduction in the estate tax exemption for inherited estates. Tax policy concerns on the part of producers could be one factor leading some producers toward a less optimistic view of the future as reflected in this month’s Future Expectations Index.

The Ag Economy Barometer and its principal sub-indices, the Index of Current Conditions and Index of Futures Expectations, declined in May. Producers were less confident about their farms’ financial performance than a month earlier and also less inclined to think now is a good time to make large investments in their farming operation, particularly in items such as new buildings and grain bins. Producers were much more inclined to think crop producers will have good times in the next five years than livestock producers and, in turn, remain very bullish about farmland values. Reflecting expectations for a strong crop sector, two-thirds of corn and soybean producers expect farmland cash rental rates to rise in 2022 compared to 2021. Finally, farmers remain very concerned about possible changes in tax policy being considered by Congress, especially changes that could make it more difficult to pass their farm on to the next generation.