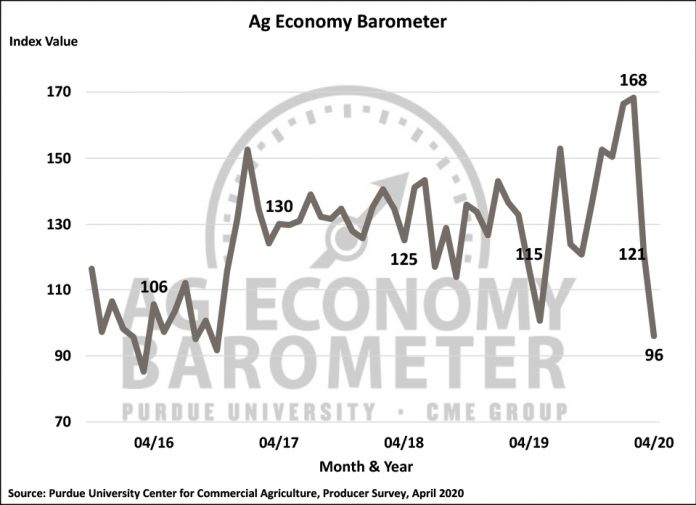 For the second month in a row the Purdue University-CME Group Ag Economy Barometer dropped sharply, falling 25 points in April to a reading of 96. This marks the first time the barometer has fallen below 100 since October 2016, effectively wiping out all of the improvement in farmer sentiment that took place following the 2016 election. April’s decline leaves the Ag Economy Barometer 72 points below its record high, which was just established in February of this year. The Ag Economy Barometer is generated each month from 400 U.S. agricultural producers’ responses to a telephone survey. This month’s survey was conducted from April 19-24, 2020.

Farmers indicated that, in the current environment, they are reluctant to make large capital investments in their farming operations. The Farm Capital Investment Index fell 16 points in April to a reading of 38, which was 34 points below its most recent high set in February of this year. April’s investment index stood at a level nearly equal to last year’s low of 37, set in May, when farmers were suffering from a combination of severe spring planting delays and low commodity prices.

Farmers’ pessimism was motivated, in part, by concerns about the impact coronavirus is having on their farms’ profitability and their farming operations. Two-thirds of farmers in this month’s survey said they were very worried (39%) or fairly worried (28%) about the impact of coronavirus on their farms’ profitability this year. Over half (54%) of the farmers responding said they anticipate applying for one of the federal government’s COVID-19 related financial assistance programs. When asked what their number one concern is regarding their farm and COVID-19, 42 percent of respondents said they were concerned about their farm’s market access, and 37 percent said their number one concern was financial. Just 13 percent of producers said their number one concern regarding their farm was health and safety. However, 35 percent of this month’s respondents said they have implemented changes in how they operate their farm in response to concerns about COVID-19.

For the second month in a row, farmer sentiment declined sharply as the Ag Economy Barometer dropped below 100 for the first time since October 2016, effectively wiping out the improvement in sentiment that took place following the 2016 election. Dramatic declines in commodity prices, combined with concerns about coronavirus impact on farm profitability, led to the largest one-month decline in the Index of Current Conditions in the history of the barometer survey. Two-thirds of farmers participating in our April survey said they were either “fairly worried” or “very worried” about the coronavirus’ impact on the farms’ profitability this year. The percentage of farmers expecting their farms’ profitability to decline in 2020 compared 2019 increased to 55 percent in April, compared to 40 percent in March, and just 30 percent who felt that way in December 2019. Over half of this month’s survey respondents said they anticipate applying for a COVID-19 related financial assistance program. Concerns about the economic outlook for their farms led fewer farmers to think now is a good time to make large investments in their farming operation as the Farm Capital Investment Index fell 16 points compared to a month earlier. This put the Farm Capital Investment Index near its lowest reading of 2019 which occurred in May amidst last year’s severe planting delays and low commodity prices. Unsurprisingly, farmers’ near-term perspective on farmland values weakened, but their longer-run perspective on farmland values actually improved slightly suggesting that they view the current disruption in agriculture and food markets to be temporary and look for markets and farm profitability to rebound in the years ahead.

Pioneer Agronomist On The Yield Implications of Corn Root Lodging