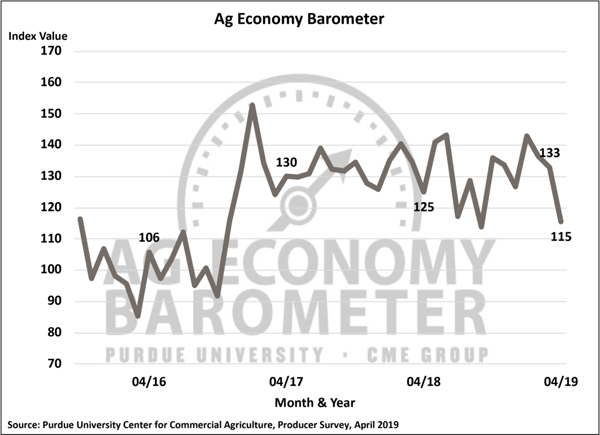 The Ag Economy Barometer plummeted in April, declining to a reading of 115, an 18-point decline compared to March when the sentiment index stood at 133. The 18-point decline in the index was the fourth largest one-month fall in the barometer since data collection began in October 2015.

When combined these responses pushed the Large Farm Investment Index to a reading of 48 in April, 9 points lower than in March and the fourth weakest reading of the investment index since fall 2015.

The largest response category, those expecting farmland values to remain about the same, fell to 59 percent from 61 percent. Although the one-month change in farmers’ perspective on farmland values was more modest than the decline in the investment index, it still stands in sharp contrast to the perception producers had of farmland values a year earlier.

Responses to the open-ended comments question at the end of each month’s survey provide interesting insights into what’s on producers’ minds. Since January there has been a shift among survey respondents with more producers indicating they have concerns about commodity prices.

To gain additional insight into producers’ expectations for corn and soybean prices, we have been using the University of Illinois’ 2019 iFarm Price Distribution Tool to learn how producers’ price expectations compare with the expected distribution of prices implied by current new crop futures prices and option premiums.

We then ask producers if they think prices are likely to exceed the 75 percent level (e.g., exceed a relatively high price) or fall below the 25 percent probability level (e.g., fall below a relatively low price) to gauge how optimistic or pessimistic they are about corn and soybean prices.

Results over the first four months of 2019 suggest producers have consistently had a more negative commodity price outlook than participants in the commodity futures and options markets and their outlook appears to be getting more pessimistic.

In January, 43 percent of producers said they expected soybean prices to fall below the 25 percent probability level and this increased in April to 48 percent, substantially more negative than futures and options market participants perspective. Producers’ increasingly negative perception regarding the likelihood that corn and soybean prices will decline is one factor behind the decline in the barometer.

Wrapping Up
The Ag Economy Barometer declined sharply in April, falling 18 points below the March reading of the index. Weakening perceptions of both current economic conditions and expectations for the future drove the index lower. The waning sentiment regarding the ag economy also pushed the Large Farm Investment Index to its lowest reading since last September as producers were less inclined to think now is good time to invest in buildings and equipment.

Producers’ expectations for farmland values in the upcoming year also softened, but this was more modest compared to their reservations regarding building and equipment purchases. Producers are less optimistic that the trade dispute with China will be resolved by July 1 than they were a month earlier, but remain optimistic that it will ultimately be resolved with terms favorable to U.S. agriculture.

A large minority (47 percent) of U.S. producers favor the U.S. rejoining the Trans-Pacific Partnership to help boost U.S. agricultural trade. Finally, producers appear to have a more negative perspective on the future direction of corn and soybean futures than do futures market participants and they have become more pessimistic since the first of the year, helping to explain some of the decline in the barometer and its two key sub-indices, the Index of Current Conditions and the Index of Future Expectations.