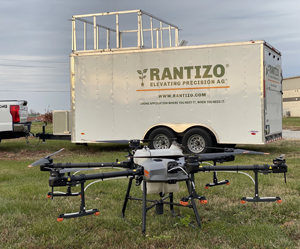 Precision ag tech company, Rantizo announced today that they have become the first company approved by the Federal Aviation Administration (FAA) for operation of the DJI Agras T-30 drone for agricultural applications.

The announcement comes highly anticipated, as the T-30 drone launched earlier in 2021, but could not be operated due to the FAA regulation only allowing the use of drones 55 pounds and under. With the exemptions received, Rantizo is the first and only company in the U.S. with the necessary approvals to operate the drone on a commercial scale.

What does that mean for agricultural spraying in 2022?
“This new platform is more than just a larger drone,” said Rantizo Special Projects Manager Beau Brown. “The DJI T-30 represents a three-generation jump in technological advancements in aerial drone sprayers, such as new avionics, obstacle avoidance and more intelligent field management. These tools, combined with Rantizo’s expertise and support, will ensure our contractors and pilots continue to be the most successful in the drone application industry.”

Considered the most productive drone spraying tool on the market, the T-30 comes with a bigger tank that when fully loaded weighs up to 169 pounds. Yet the drone can fit in the back of the average truck bed.

“We’ve been seeing demand for bigger drones since day one,” said Rantizo Marketing Manager Emily Carlson. “However, we are calculated in what products we offer within our system for drone applications and when we release them. Headed into the 2022 season, our approvals for use of the T-30 will be a game changer for both Rantizo contractors and the growers they serve.”

For farmers, drones supply another tool in the toolbox of options to increase efficiency in realm of precision agriculture. Benefits of on-farm drone usage include:

• Little to no crop damage when compared to conventional sprayers
• Major cost savings on inputs with spot-spraying capability
• Improved soil health due to no machinery-caused soil compaction
• More versatility in application, less reliance on weather due to precise application
• Additional method of cover crop broadcast seeding

Rantizo offers a turnkey system for drone application designed to make in-field applications such as pesticide application or the broadcast application of cover crops simple, efficient, safe and legal. The Rantizo system includes drone equipment, but more importantly, a streamlined path to use in the field, with peace of mind on regulations and legalities for those providing custom drone application services.

“Ag retailers want to stay on the cutting edge,” Rantizo Director of Sales Sam Pendleton explained. “It’s what their customers expect,” he added. “But at the same time, they have to consider how drone applications could work in their operation. Whether that’s covering the awkward acres to make their ground rigs more efficient, adding a more precise option to their aerial fleet, or simply gaining the ability to target site-specific areas to provide cost-effective options to their customers. Rantizo has been committed to providing those retailers with a system designed to do all of that for them in a safe and legal way; the addition of the T-30 is only going to enhance those benefits.”

To date, Rantizo’s system has been primarily focused around the 10 Liter DJI Agras MG-1P. The Iowa City-based startup added proprietary technology such as their Upgrade Kit and additional waivers for multi-drone swarming to optimize productivity in the field. The addition of a larger drone with more payload capacity, speed and use-case functionality will bring drone application viability across a larger spectrum into the 2022 season.

“As a company, we have developed a culture around product development that originates from what the customer wants,” said CEO Michael Ott. “In our case we have two customer segments to consider: our network of contractors who want the most productive drone application system available to provide services, and their farmer customers who want both precision and cost-effective options for in-field applications. Whether we tackle this with multiple drones, or larger drones, the result is a win-win for both and that’s always what we keep at the forefront. Our approvals for the T-30 are just the next step in the evolution of where drone applications are headed for ag.”

With the latest approvals, Rantizo now has the green light to offer the T-30 drone for sale.

“We could have put the T-30 up on our website with a ‘buy now’ button several months ago, and I’m confident we would have sold out,” Pendleton shared. “The demand has been there. But we don’t just sell someone a drone and let them figure out the rest on their own. It doesn’t do the customer any good, and it certainly doesn’t do the industry any favors. Now, Rantizo is able to offer the largest, most productive drone on the market to our customers with a clear-cut path to use and profitability they can feel confident in. That’s what sets us apart.”

Rantizo plans to roll out the T-30 availability for purchase by December. For further information on the Rantizo system, pricing or package options, email info@rantizo.com.