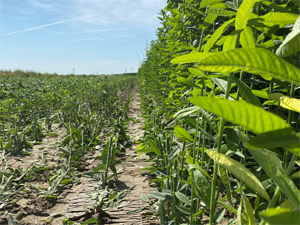 If you’ve ever moved from one location in the US to another, you may know that different regions have different “hardiness zones” for outdoor plants. So, if you live in the south, and want to bring a prized rose bush when you move to a northern state, it most likely won’t survive.

Growers face the same issues. Where a crop is tolerant to conditions in one state, it may not work in another. The same could be true in different regions of states – the western coast of Washington gets more rainfall than the eastern part. That means growers may have to plant and harvest different crops, even in the same state.on left, cut sunn hemp, on right tall sunn hemp waiting to be harvested

The Northern High Plains of Wyoming have a crop and livestock industry that is limited by market accessibility, infertile soils, and short growing seasons. Adding a new type of crop to be grown could help maintain the sustainability of the area. A research team at the University of Wyoming is researching whether sunn hemp, a typically southern crop, can be grown in Wyoming.

“Developing alternative crops that not only maximize productivity but also meet a multitude of needs for producers is vital in the region,” says Carrie Eberle, an assistant professor at the university. “Producers in Wyoming have identified improved forage, drought resistant forage, and alternative legumes and forages as research priorities for production agriculture research. Sunn hemp is a legume crop and could meet all those needs.”

The results of Eberle’s research were recently published in Crop Science Journal, a publication of Crop Science Society of America.

Sunn hemp is a fast-growing crop, often over two tons of biomass in just 60 days. All the leaves and stems create biomass. When cut and left on the field, it can be used as a “green manure.” In other areas, it is grown as a forage for animals. Sunn hemp is adaptable to a wide range of soil types and is relatively drought resistant, good news for semi-arid and drought-prone areas like eastern Wyoming. And, as a legume crop, it can add nitrogen to the soil through a process called nitrogen fixation.

Just over half of the forage fields in Wyoming are planted with alfalfa, another legume. Other common warm season annuals used as alternative hay sources are teff grass, millet, and sorghum. However, these crops don’t have as much nutrition for animals as alfalfa – or sunn hemp.

But sunn hemp needed to be evaluated for growing success in Wyoming before growers could add this to their rotations. That’s where Eberle and her team come in.

During the summers of 2017 and 2018, the team planted plots of sunn hemp. Some were irrigated and other plots only received water from rainfall. The team also varied the planting dates of the crop to see if that would influence the yield and nutritive value of sunn hemp.

“Sunn hemp’s potential was intriguing, and our research shows that it can be grown in Wyoming,” says Eberle. “Yields were promising in both the rain-fed and irrigated systems. We determined specific planting date ranges and see a real opportunity for sunn hemp in Wyoming.”

The team also evaluated the nutritive value of sunn hemp compared to alfalfa. “Nutritive concentrations for sunn hemp fell within the highest hay quality designation for alfalfa hay set by the United States Department of Agriculture,” says Eberle. “It was equal to ‘supreme quality alfalfa.'”

Future studies for the team may include best practices in irrigation management, field establishment, harvest time, and livestock feeding. This work is supported by Hatch funding from the USDA National Institute of Food and Agriculture, project #1009586.