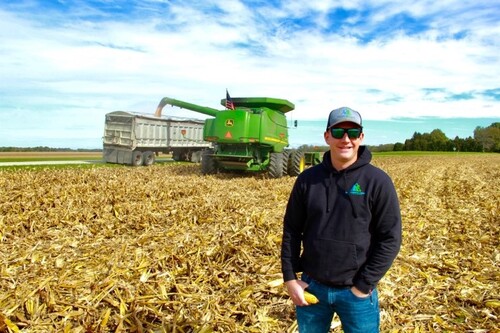 Many top farmers and agronomists are insisting next crop’s success starts right now – when your combine leaves the field – and they’re using a post-harvest application of EXCAVATOR, powered by MICROBILIZE, to release major-league plant nutrition.

“No more trash talk,” smiles Fred Below, PhD, crop physiologist at the University of Illinois, who says corn yield must also take the value of the “stover” or residue into account. Below has calculated that 200 bushel/A. corn will produce 4.5 tons/A. of residue holding more than 200 pounds of NPK nutritional value per acre. “There’s just too much nutrient value in residue to not take residue management seriously.”

Breaking down stalks and releasing nutrients is key to next season’s crop, agrees Lewis Stearns, farmer and founding agronomist at Progressive Crop Solutions, serving farmers in Ohio, Indiana and Michigan. “We’re recommending a post-harvest application of EXCAVATOR from Meristem because we’re seen a three-to-one ROI (return on investment) in terms of available nutrients, especially phosphorus, potassium and zinc.”

The data Stearns evaluated came from an effort Meristem Crop Performance began earlier this season, when the company sent hundreds of farmers across the Corn Belt enough EXCAVATOR to treat 25 acres. Meristem’s “EXCAVATOR Field Team” visited farmers who used the product across the U.S., pulling soil samples and doing stand counts in treated 25-acre plots and untreated control plots. To evaluate and assure data consistency and quality, Meristem engaged Stearns and his company, along with experts at DPH Biologicals and Total Acre, to evaluate the body of data.

“Of course, there was a lot of variability,” says Mitch Eviston, Meristem Founder and CEO. “Some growers didn’t get it on in the spring. There were also issues with timing, soil type variability and sampling.” But in the end, Eviston says, the win rate was clear and compelling. “We ended up with hundreds of soil tests, treated and untreated, and most of time, using EXCAVATOR increased availability of N, P, and K, and based on the K alone, we saw an average return of $39/acre nutrient value.”

Eviston says EXCAVATOR powered by MICROBILIZE breaks down residue faster, because the surfactant package penetrates the cuticle faster. “We’ve seen a dramatic increase in the action of these microbes. Combining EXCAVATOR in the fall and REVLINE HOPPER THROTTLE at planting time can truly be considered the starter system for the next generation.” He says fast-acting EXCAVATOR powered by MICROBILIZE is bringing productivity to wheat growers, too.

“We had 272-bushel corn off one of those fields and we are getting ready to plant no-till wheat into it,” says Brent Willin, Seaford, Delaware. “We’ve sprayed our EXCAVATOR right after the combine left the field.” Willin sees the value of residue and uses a Calmer stalk roll and a flail shredder to begin the breakdown process. He will apply EXCAVATOR powered by MICROBILIZE on 500 acres this year to free up those nutrients faster.

“Our target yields average in the 260 bu./acre range,” he says, “and of course that makes for a lot of residue — last year we had our best-ever wheat crop and we were still fighting the corn fodder in the planting.” Willin is looking at EXCAVATOR to make drilling his winter wheat easier – and on the ground that goes corn-on-corn this year, we’re trying to avoid a tillage pass. “I’ve heard good things and now we’ll see if it works for us.”

Near Axtell, Neb., Ty Fickenscher is getting ready to start harvest next week with high-moisture corn. He’s planning to follow-up with a fall application of EXCAVATOR. “Around here the high-management farmers are looking to apply EXCAVATOR,” says Fichenscher, who farms and runs Upward Ag, an agronomic consulting business. “They’ve seen enough benefit from easier planting in the spring to run their sprayer in the fall to put EXCAVATOR on that residue. Those guys seem to understand the value of the nutrients in the residue. They’re going to be checking their yield to see how it translates into bushels.”

While fertilizer costs bring nutrient value into sharp focus, Rob McClelland, Meristem President and CMO, says that’s only a part of the overall return on investment (ROI) EXCAVATOR powered by MICROBILIZE brings. Though he says results will vary, ROI could easily tally up to nearly $100/acre:

Breaking down residue faster will allow faster planting with fewer skips: $25/A.

“We can reduce waste and boost real productivity with this kind of practical innovation that helps farmers make the most of their residue and release nutrients they already own,” says McClelland. “We’re opening up a path for new technology that helps growers make the most of every dollar they spend on crop inputs.” For more a map of EXCAVATOR soil test results, visit www.meristemag.com.

Meristem Crop Performance Group, LLC (www.meristemag.com) is one of the fastest-growing crop input companies in America. Meristem sources, formulates, licenses, and delivers high-quality crop inputs to farmers at the highest possible value offering substantial savings. Meristem is focused on building a highly efficient channel to bring crop inputs to market so farm businesses can make the most of their infrastructure and intellectual property investments and better compete in the global agricultural market. Meristem’s team of experienced ag professionals also works to create real productivity gains for farm businesses through novel biological delivery systems and accelerated access to farm-ready innovations.