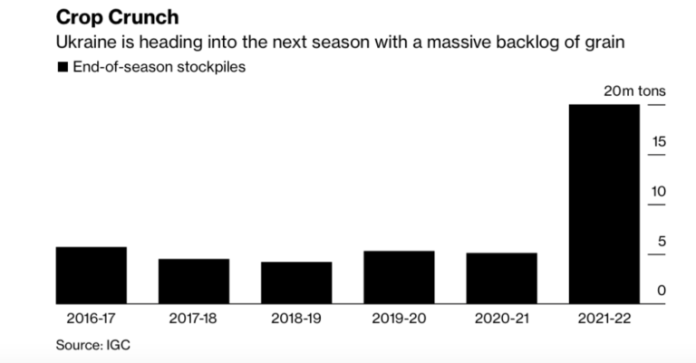 “‘We appreciate (Turkish) support. Discussed the importance of unblocking (Ukrainian) ports and resuming grain exports. We must also prevent Russia from taking our grain from (occupied territories),’ he tweeted.”

Held talks with 🇹🇷 President @RTErdogan. Thanked for condolences over new civilian victims of the Russian aggression. We appreciate 🇹🇷 support. Discussed the importance of unblocking 🇺🇦 ports and resuming grain exports. We must also prevent Russia from taking our grain from TOT.

A separate Reuters News article yesterday reported that, “Russian President Vladimir Putin and Turkish leader Tayyip Erdogan plan to meet in the near future after a phone conversation in which they discussed efforts to facilitate grain exports from Ukraine, the Kremlin said on Monday.

“Turkey has been mediating between Moscow and Kyiv since Russia sent its armed forces into Ukraine on Feb. 24. The last talks between representatives of Russia and Ukraine were held in Istanbul in the end of March.”

“The Turkish state-owned Anadolu news agency said Erdogan had told Putin on Monday that it was time to act on a United Nations plan to set up a sea corridor for Ukrainian grain exports through the Black Sea,” the Reuters article said.

And today, Reuters News reported that,

A fresh round of talks between Russia, Ukraine, Turkey and the United Nations over grain exports from Ukraine will take place on Wednesday in Istanbul, Interfax news agency reported, citing the Russian foreign ministry.

As talks continue, Reuters writer Pavel Polityuk reported yesterday that, “Ukraine’s grain exports in the first seven days of July, the first month of the new 2022/23 season, were down 30% year on year at 402,000 tonnes, the agriculture ministry said on Monday.”

“The government has said that Ukraine could harvest at least 50 million tonnes of grain this year, compared with a record 86 million tonnes in 2021, because of the loss of land to Russian forces and lower grain yields,” the Reuters article said.

Meanwhile, Reuters News reported today that, “Farmers in Russia’s southern Rostov region, one of the largest grain producing and exporting areas of the country, are seeing high wheat yields as harvesting gets underway, growers and officials in the region said.

“Sanctions-hit Russia, the world’s largest wheat exporter, is expected to produce a massive crop in 2022 with record amounts available to supply abroad in the July-June marketing season.”

However, Reuters News reported yesterday that, “Russian wheat exports are expected to remain muted in July despite lower export tax, a massive crop and a weakening rouble as problems with logistics and trade finance caused by Western sanctions persist.

“The world’s largest wheat exporter is expected to have record amounts of the crop available to supply abroad in the July-June marketing season, and reduced grain export taxes sharply on July 1 to support shipments.

“The IKAR agriculture consultancy said on Monday that it downgraded its forecast for Russia’s July wheat exports to 1.7-2.0 million tonnes from the previously expected 2.0-2.3 million tonnes.”

Meanwhile, a recent opinion item from The Financial Times pointed out that, “Even some food commodity prices, whose rise was among the most tragic repercussions of Russia’s war on Ukraine given the latter’s key role as a supplier of agricultural goods, have been coming back to earth. Wheat now trades at the same price as right before the invasion, and almost 40 per cent below the peak in May.”