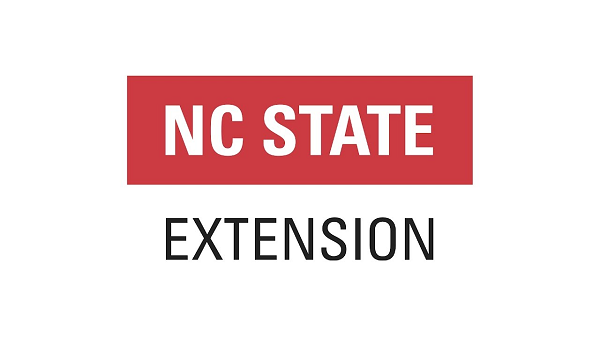 Corn earworm, also known as bollworm and tomato fruitworm, is an important pest that causes economic damage to a wide variety of globally important crops, such as corn, cotton, sorghum, vegetables, tobacco, and soybeans. In the Southeastern region of the US, this pest causes major yield loss in cotton and soybeans, but usually not corn. However, the economic threshold for soybeans depends on crop price, cost of control, sampling method, and row width (for more information use the Corn Earworm Threshold Calculator for Soybeans). Usually, the threshold increases when prices are below $10/bushel and at lower levels of earworm feeding, soybean can compensate for potential yield loss.
Soybean varieties are classified depending on growth habit. Soybean varieties with a determinate growth habit terminate vegetative growth on the main stem once reproductive stages begin. In contrast, varieties with an indeterminate growth habit continue vegetative growth once reproductive stages begins. In recent years, many North Carolina soybeans producers are opting to plant indeterminate soybean varieties for the associated yield benefits in both full season and double crop production scenarios.
Previous research supported by the North Carolina Soybean Producers Association has found that corn earworm thresholds should remain static for full-season soybeans with determinate and indeterminate growth habits. My research is focused on this question for double-cropped soybeans. Theoretically, double-cropped soybeans may have less potential to compensate for yield loss than full-season soybean due to a shorter season and late-season stress.

Indeterminate varieties flower longer than determinate varieties; as a result, there may be more tissue available for a longer time for corn earworm to lay eggs and feed on it. Adult corn earworm prefers to lay eggs during the R1 and R2 flowering stages of soybeans and, once the eggs hatch, the caterpillars will injure flowers, pods, and leaves of soybeans. While it is difficult for caterpillars to eat enough flowers to cause yield loss, once pods form on the plant, the risk of yield loss is much greater. Hence, flowering is not the ideal time to spray, because it will likely not protect yield and might kill beneficial insects, resulting in even more yield loss from flaring other pests.

To answer this question, four soybean varieties were planted in 2021: 5220R2X/SR, AG55XF0XF, AG52XF0XF/SR, and AG52XF0XF/SR. Two were determinate varieties, and the other two were indeterminate varieties. Relative maturity varied among 5.2, 5.4 and 5.5. Those soybeans were planted in the middle of July 2021 to simulate double cropping. I sampled the plots weekly (Fig. A, B, C).

Fig. A-C.Usually, the right time to start scouting for corn earworm larvae in soybeans is just prior to bloom and during R1 until R5-R6 as demonstrated by Fig. D (below). 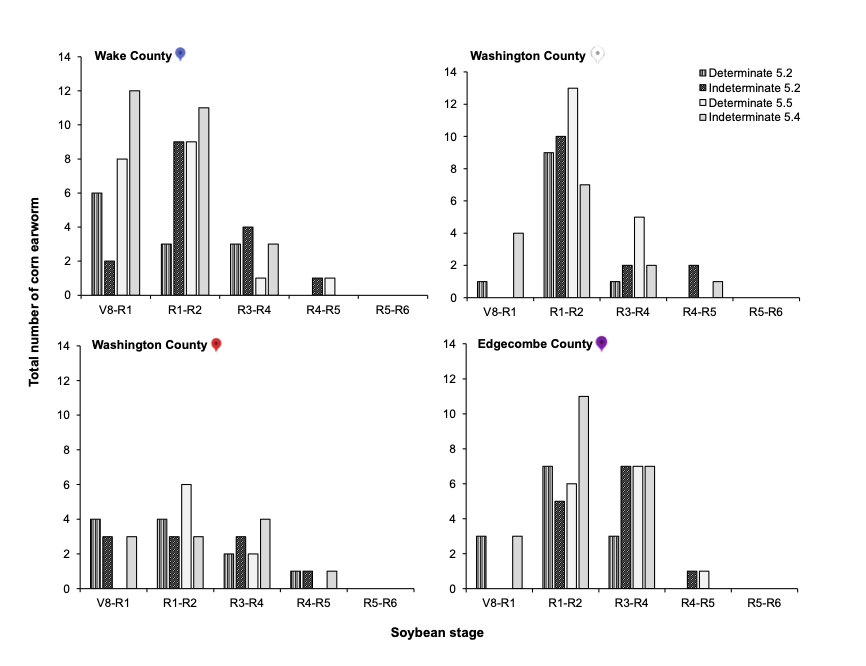 Fig. D. There was no significant difference in soybean yield among varieties in each county (you can see the field location in the map in the right of the graphic). However, in 2021 we had low corn earworm pressure, and none of the fields sampled reach the threshold.
The first take-home message from this research is that there were no yield differences between the indeterminate and determinate varieties in the same relative maturities. There is a lot of turn row dialog about the advantage of an indeterminate