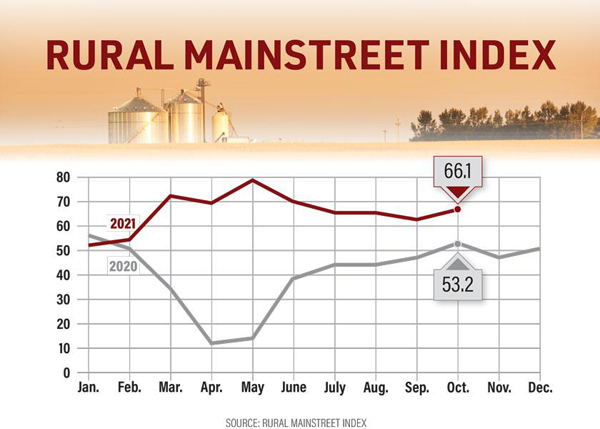 For nearly a year, the rural economy has shown consistent growth, according to the Creighton University Rural Mainstreet Index (RMI).

“Solid grain prices, the Federal Reserve’s record-low interest rates, and growing exports have underpinned the Rural Mainstreet Economy,” says Ernie Goss, who chairs Creighton’s Heider College of Business and leads the RMI. “USDA data show 2021 year-to-date agriculture exports are more than 25% above that for the same period in 2020. This has been an important factor supporting the Rural Mainstreet economy.”

Farmland prices condition to accelerate. The region’s farmland price index slid to a very strong 81.5 from September’s record 85.2. October’s reading represented the 14th straight month that the index has moved above growth neutral.

The October farm equipment-sales index slipped to a strong 64.8 from 66 in September. Readings over the last several months represent the strongest consistent growth since 2012.

Bank CEOs indicated that congestion at domestic transportation hubs represented the greatest supply chain disruption for farmers. Other key challenges include bottlenecks at processors and delays for purchasing inputs and equipment.

The confidence index, which reflects bank CEO expectations for the economy six months out sank for the fourth straight month to 51.8, its lowest level since November of last year, and down from September’s much stronger 65.4.

The RMI, which started in 2005, represents an early snapshot of the economy of rural agricultural and energy-dependent portions of the nation. It focuses on 200 rural communities with an average population of 1,300.