Terry Fleck of the Center for Food Integrity (CFI) says as the size and scale of farming grows, so does the public’s skepticism about large farming operations.

“Big Agriculture just doesn’t feel right to a lot of consumers,” Fleck says. “When they hear of large farms, they really wonder whether or not large farming has their best interests at heart.”

Fleck says there’s a perception that profit is the overriding motive on large farms, “and that large means we are just about efficiencies and making more money-at the expense of the earth.”

At the same time, Fleck believes agriculture has “a golden opportunity” to move the needle with consumers. He cites a recent CFI survey in which 65 percent of consumers said they are hungry for information about agriculture. But Fleck says it’s important to separate “the farmer from the farm”.

“Americans have a great deal of trust in farmers. What they just don’t like is farming,” he says. “So we encourage you to separate those two-let’s talk about the values of the farmer, and then, how that relates to farming.” 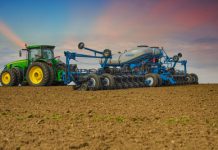