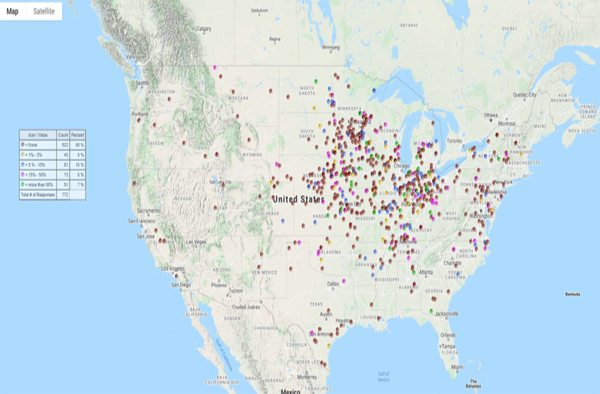 While the first Prospective Plantings Report for 2021 shows total corn and soybean acres will be up over last year, the increases announced Wednesday weren’t what the marketplace anticipated. However, USDA Chief Economist Seth Meyer was quick to offer this reminder to everyone who expected a different outcome.
“This is an intentions report, it’s about prospective plantings,” Meyer told U.S. Farm Report Host Tyne Morgan.

Indeed, the March Prospective Plantings Report provides the first official, survey-based estimates of U.S. farmers’ 2021 planting intentions. The NASS acreage estimates are based on surveys conducted during the first two weeks of March from a sample of nearly 80,000 farm operators across the nation.

Meyer says the June report will provide more clarity on how many acres farmers actually plant and how those acres break out between crops.

Based on a Farm Journal Pulse Survey, 68% of farmers say they have already settled on their crop mix for 2021.

Of the 772 farmers who responded to the survey, distributed in late March, 522 said they wouldn’t change their crop mix, regardless of what they learned from the Prospective Plantings Report. However, a small percentage of farmers (7%) said they would consider switching more than 50% of their acres to other crops yet this spring.

Some of those changes are likely to show up as more sorghum acres, Meyer anticipates.

“We’re seeing sorghum pop back up along the lines of what we saw in 2015,” he says. “(Based on what) the Chinese are taking, they’re still saying a lot of corn and now they’re taking a lot of sorghum, so I think that remains part of the story.”