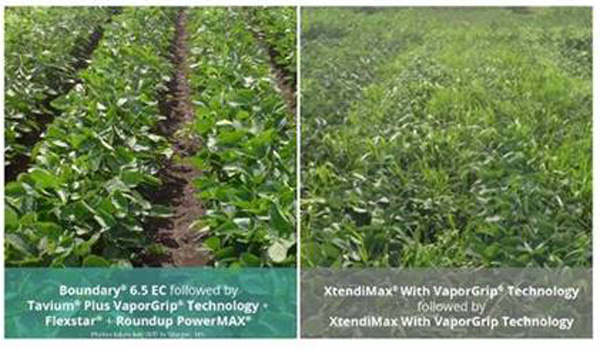 yngenta announced today that its newest herbicide, Tavium Plus VaporGrip Technology herbicide, has been registered by the U.S. Environmental Protection Agency (EPA). As the market’s first premix residual dicamba herbicide, Tavium contains built-in residual control to manage resistant weeds and maintain clean fields throughout the season. Tavium, a proprietary Syngenta premix, will be available for the 2019 growing season, subject to state approvals.

Tavium can be used preplant, at planting and early post-emergence on Roundup Ready 2 Xtend Soybeans and Bollgard II XtendFlex Cotton. The premix of dicamba and S-metolachlor offers growers a convenient new tool to manage key ALS-, PPO- and glyphosate-resistant broadleaf and grass weeds.

“Unlike all other stand-alone dicamba products, the multiple effective sites of action in Tavium broaden the activity spectrum and increase its overall efficacy and sustainability,” said Bobby Bachman, herbicide product lead at Syngenta. “The addition of S-metolachlor with dicamba in a premix not only helps manage resistance, but it offers up to three weeks longer residual control than dicamba alone.”

Tavium will be a valuable tool for growers in the fight against the most difficult-to-control resistant weeds and is formulated for exceptional performance by:

Tavium should be used as part of a two-pass program in order to preserve the efficacy of auxin technologies like dicamba. Syngenta recommends applying Tavium in a two-pass system, following a pre-emergence application of Boundary 6.5 EC, BroadAxe XC or Prefix herbicides in soybeans, or after Caparol 4L herbicide in cotton.

“The premix formulation provides an easy way to reduce selection pressure on dicamba, but a system of pre- and post-emergence herbicides is still crucial,” Bachman said. “Practicing sound resistance management principles – such as starting clean and using diversified management and agronomic practices – will help growers be good stewards of the technology.”

With the additional residual control and second layer of effectiveness against weeds, Tavium is another example of how Syngenta is accelerating innovation to address the increasing challenges for farmers and the environment, as well as the changing views of society. We are investing in technologies that matter to bring about positive, lasting change for more sustainable agriculture.