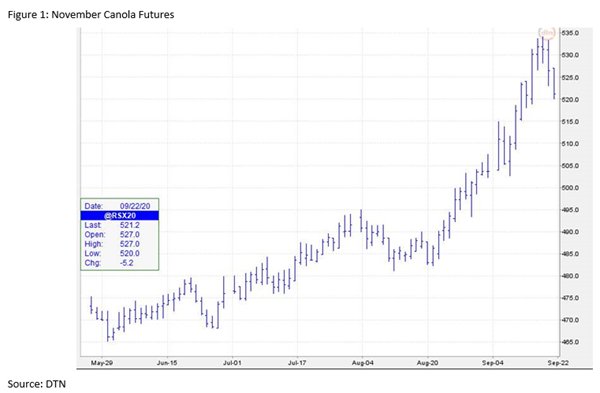 Provincial crop analyst Neil Blue looks at the factors that have led to the recent rally.

Blue says that, from a supply point of view, lower production of palm oil began to support those prices back in the spring. The primary driver of canola prices are the vegetable oil markets, of which palm oil is the largest in volume.

‘Hot weather during canola flowering was followed by dryness in much of Saskatchewan on the Canadian Prairies. Then in mid-August, adverse weather affected production in the major U.S. soybean producing states. Although the canola and soybean crops are still expected to be large, expected yields have been trimmed.’

On the demand side, Blue notes that China has booked much higher soybean purchases from the U.S. than year ago.

‘Part of this demand is thought to be due to the recovery in China’s hog population after millions of hogs were lost there to African swine fever. Canadian canola exports 6 weeks into the crop year are 30% higher than last year at this time. Canola crushing so far is similar to last year’s strong pace.’

Then there is the influence of speculative funds who try to profit from price moves.

‘Some speculative trading in the futures and options market is a good thing as that trading activity adds trading volume, which helps hedgers to more easily enter and exit the market,’ he explains.

‘Each week in the U.S., the Commodity Futures Trading Commission gathers and releases information on what groups hold positions in each commodity futures. The speculative funds had been in a sell position on canola and soybean futures. As prices began to rise on changes in expected production and strong U.S. soybean sales to China, the spec funds began to buy, first offsetting their sell position and then moving to a buy position. This enhanced the price rise.’

Now that harvest is underway, he adds that some farmers are taking advantage of the higher prices by selling newly harvested crop.

‘That selling by producers is supressing a continued price rally for now. There is still plenty of uncertainty in the market. Actual soybean and canola production will not be known for a few weeks yet. Continuation by China in buying large amounts of U.S. soybeans is uncertain. South America is expected to produce a record soybean crop. If weather in South America supports large crop production there, that crop will become available to export early in 2021 and into next summer.’

‘Meanwhile,’ Blue says, ‘pricing some canola during harvest at from $11 to $12 a bushel for near-term and deferred delivery is a pleasant market surprise to take advantage of.’