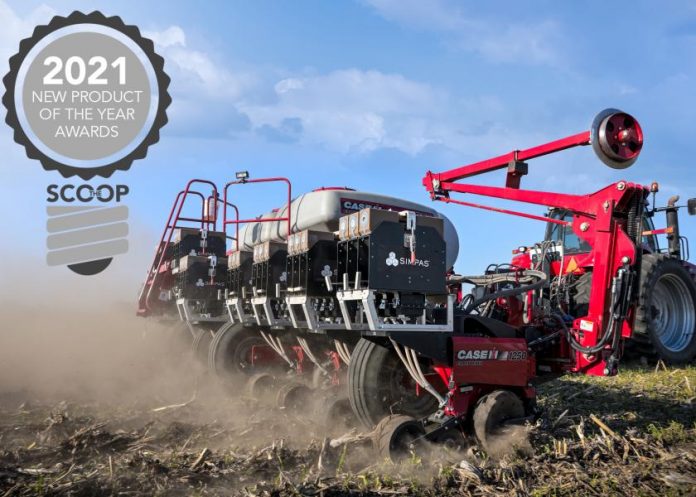 For the 14th year, our brand that serves ag retailers has hosted a New Product of the Year contest. For 2020, The Scoop’s readers voted and named SIMPAS from AMVAC and Trimble as the readers’ choice winner.

“We’re thrilled to be nominated and to win. We are inherently excited about the technology,” says Jim Lappin, AMVAC Director of SIMPAS Product Portfolio and Alliances. “We have been working on SIMPAS for several years. The more we interface with people the more excitement has been building in the marketplace.”

This past year served as a pivotal year in the product’s trajectory. After three years of development and early testing, the company took the prototype SIMPAS to beta test with five retailers across the country.

“I’ve been part of the journey since SIMPAS was just a concept,” says Jason Jimmerson, SIMPAS Technologies Commercial Manager. “It’s been a powerful experience. And one of our beta testers said that this project was a new tool for his farm—a way to be more efficient that aligns with his passion for stewardship on top of making him more profitable.”

The beta testing solidified the product design and spring-boarded SIMPAS into distribution by Trimble for corn growers in 2021.

This technology is a tool that empowers trusted advisers to help further refine and improve agronomic recommendations and placements.

“Our goal is to solve geospatial agronomic problems in the field, and the trusted adviser is in the best position to have the knowledge and relationship with the operation in how the retailers can provide prescriptive services,” Lappin says. “The retailers we are talking to, have invested in prescription ag and  have agronomists on the ground.”

Jimmerson adds that the true value of the system depends on the quality of the prescription made for the effective application of the specific inputs.

“We learned in 2020 and we are going to take this into 2021, that the cornerstone of success in using this system is the prescription,” Jimmerson says. “Often it’s the retailers who are taking the samples to measure pest pressures, agronomic deficiencies, and helping to define prescriptions to target location-specific needs within fields.”

This technology sets the stage to rethink input application and what’s applied when.

“SIMPAS will redefine at plant return on investment, and it doesn’t matter which ‘at plant’ input,” Lappin says. “When you make whole field applications, you are getting an average result on a broad approach. But it’s smarter to use the products precisely. And as the analytical tools continue to get better, this system will get better. It will be more actionable for the grower—and how to get the best return for using a given input.”

Lappin also says SIMPAS has the potential to change how inputs are sold.

“When we listened to beta customers in 2020, we heard them talk about planting efficiency and leaving the shed in the morning, and then only needing to swap out containers when they swapped out seed. It’s a lot easier to lift a 20 lb. SmartCartridge container than dump a 50 lb. bag,” he says. “And we heard very positive feedback about how farmers want more real-time data on how much is being applied exactly where in a field. So we are working to deliver that real-time feedback loop.”

AMVAC has 25 potential SIMPAS-applied Solution projects in the pipeline for development with SIMPAS. Lappin shares the goal is to bring three to five new products a year and build a deeper bench of solutions delivered by SIMPAS.