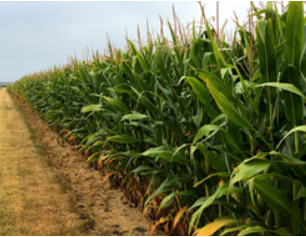 Soil microbes are living, working barometers of soil health. They are responsible for turning atmospheric nitrogen into forms plants can use, and for releasing nitrogen back into the air. Farm management decisions undoubtedly affect these microscopic workhorses, but, until now, scientists didn’t have a full picture of how crop rotation and tillage influence the soil microbiome.

“Most research on soil microbial health has been done in a lab or greenhouse setting, or in short-term field experiments. Here in Illinois, we have a fantastic opportunity to look at what long-term farm management does to the soil,” says Maria Villamil, associate professor in the Department of Crop Sciences at the University of Illinois and co-author on a new study published in Science of the Total Environment.

Leveraging a 20-year field experiment, Illinois crop scientists demonstrated significant risks associated with continuous corn rotations, both for the soil microbial community and for environmental health on a larger scale.

“In order to maintain yield levels under continuous corn, more inorganic nitrogen is required, thereby intensifying the nitrogen cycle and causing a dangerous loop,” says Gevan Behnke, lead author on the study and postdoctoral researcher in crop sciences. “The result is acidification and potential increases in nitrogen loss and harmful nitrous oxide emissions.”

Rotating corn with soybean for a year or more tempers the effect, the researchers found.

Illinois crop scientists first planted corn and soybean at the experimental site in 1996, with some fields in continuous corn, others in continuous soybean, and others rotating annually between the crops. Within each cropping system, fields were either not tilled or chisel-tilled each year.

Behnke analyzed soil samples taken from each field type in 2015 and 2016, extracting DNA and measuring physical and chemical properties.

“The DNA analysis was important because a lot of problems are related to the nitrogen cycle, whether that’s nitrous oxide emissions, nitrate leaching to water bodies, or just a toxic build-up of nitrogen in the soil,” Behnke says. “Therefore, we studied genes and microbial groups associated with fixation, nitrification, and denitrification.”

The process of microbial nitrification turns ammonia fertilizer into nitrate, a much more mobile form associated with runoff and leaching. Denitrification, on the other hand, turns nitrate into gaseous forms, including nitric and nitrous oxide, a potent greenhouse gas.

“Previous studies have shown continuous corn emitting more greenhouse gases, but our study explained why on a microbial level,” Behnke says. “It was good to see our results match up like that.”

No-till management increased soil organic matter, which led to more acidic soils and an increase in the abundance of bacteria that turn ammonia into nitrate.

“Nitrogen is left on the soil in no-till fields, whereas tillage can really spread out that nitrogen throughout the top 10 centimeters. However, tillage by itself wasn’t as strong a driver of microbial abundance as crop rotation,” Behnke says. “Ultimately, reducing the number of corn years will help decrease the negative effects of continuous corn on soil health.”

The first-of-its-kind study not only provides important foundational information about soil health in agronomic systems, it also establishes a baseline for future research.

Villamil’s larger research program seeks to understand how cover crops affect soil microbial activity when added to corn and soy rotations. Her team recently published an analysis of existing research on the topic and completed two years of field sampling with cover crops at the long-term site.

“Big picture, we’re looking at whether there’s a potential to manipulate soil health and the microbiome with cover crops. In Illinois, we’re kind of stuck with this system of corn and soybean. Our results indicate alternating corn with soybean might help, but they’re really very similar crops, both very extractive,” Villamil says. “We need to increase the diversity of crops either in time or in space, and I think cover crops is one of the solutions we have at this moment. We need to gain awareness.”

She adds that improving soil health is of the utmost importance, regardless of the method.

“Soil health has a lot of linkages with environmental health, mainly through greenhouse gas control, but also to human health. Recent research finds correlations between soil microbial biodiversity and the human microbiome. So there’s a strong need to really understand soil health functioning within different agricultural settings because of these strong links with environmental health and potentially human health,” she says. “Healthy soil supports healthy life.”

The Department of Crop Sciences is in the College of Agricultural, Consumer and Environmental Sciences at the University of Illinois.