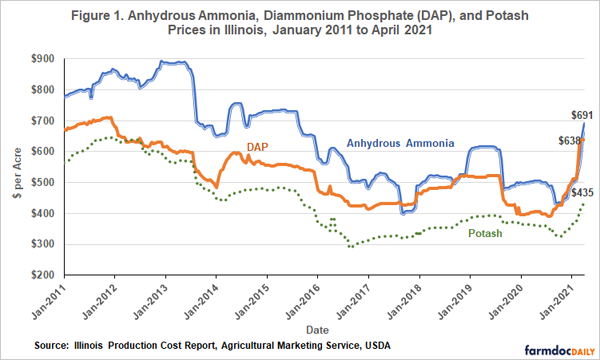 From September 10, 2020, to April 8, 2021, AMS reported an increase in Diammonium Phosphate (DAP) from $414 per ton to $638 per ton, an increase of $224 per ton, or 54%. DAP prices are now at their highest level since December 2011 (see Figure 1). As 46% of its weight is phosphate, DAP is used by many Illinois farmers to provide phosphate requirements. Eighteen percent of DAP’s weight is in nitrogen, thereby also providing nitrogen.

Timing of fertilizer purchase for the 2021 crop will significantly impact total fertilizer costs, as illustrated in Table 1. Table 1 shows the calculation of per acre fertilizer costs for corn and soybeans grown in central Illinois using fertilizer prices on September 9, 2020, and April 8, 2021. Fertilizer requirements are derived from University of Illinois recommendations. 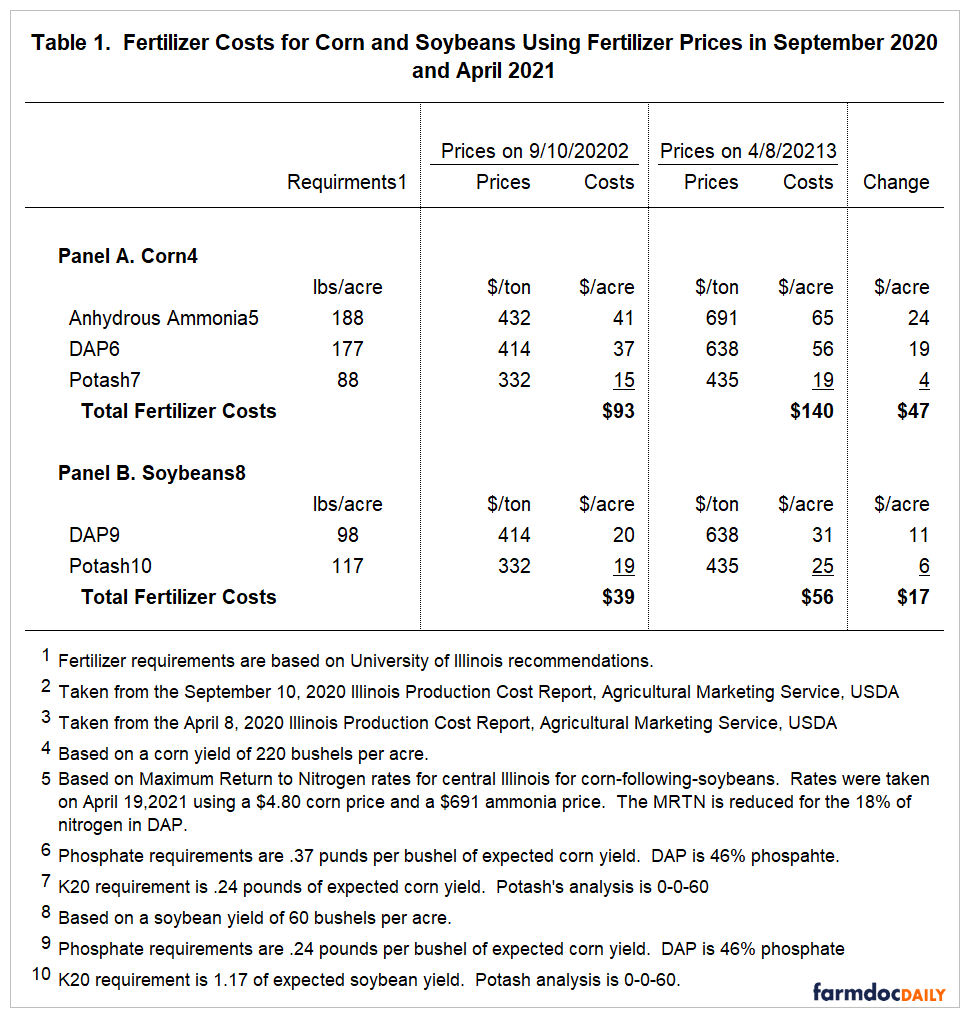 DAP and potash application levels shown in Table 1 are based on average removal rates for corn and soybeans (see Nafziger, farmdoc, September 7, 2017). Expected yields are 220 bushels per acre for corn and 60 bushels per acre for soybeans (see footnotes on Table 1 for calculations of requirements). The nitrogen application rate for corn is based on the Maximum Return to Nitrogen (MRTN) rate as calculated on a website maintained by seven Midwest Land Grant Universities (here). The MRTN rate was obtained on April 19, 2020, using a corn price of $4.80 per bushel and an anhydrous ammonia price of $691 per ton for corn-after-soybeans grown in central Illinois. Anhydrous ammonia requirements account for a reduction in the MRTN rate to account for the 18% of DAP that is nitrogen. A full credit for the nitrogen in DAP is taken under the assumption that DAP was applied after November 1 when the ground was cool (Nafziger, farmdoc daily, March 29, 2019).

Fertilizer prices have increased a great deal since the fall of 2020. These large price increases have corresponded to corn and soybean price increases. Increased fertilizer costs will offset some of the additional profitability that may result from corn and soybean production if higher prices persist into the Fall of this year and winter of next year. Input Prices have a history of increasing with corn prices (see farmdoc daily, September 15, 2015, June 14, 2016). As a result, the current price increases are not unexpected. Given historical relationships, one would not expect nitrogen and other fertilizer prices to decline until corn and soybeans prices decline, likely in a lagged relationship.

Fertilizer costs have increased more for corn than for soybeans.  Overall, this will increase the profitability of soybeans relative to corn.  Soybeans have been projected more profitable than corn so the additional fertilizer costs may not influence acreage decisions (see farmdoc daily, October 27, 2020).

Seeding of 2021 crop underway in Saskatchewan