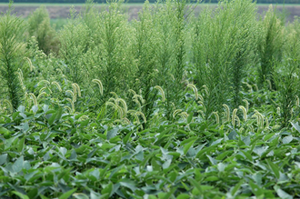 Growing crops in a changing climate is tough enough, but when weeds factor in, soybean yields take a massive hit. That’s according to new research from the University of Illinois and the USDA Agricultural Research Service, and it means farmers will need to achieve greater weed control than ever to avoid yield loss.

The researchers analyzed factors leading to soybean yield loss in a 26-year herbicide evaluation dataset spanning hundreds of weather environments in Illinois. Inadequate late-season weed control – anything less than 76% – was responsible for a colossal 41% yield loss. And when drought and heat hit, even high levels of weed control (up to 93%) couldn’t stave off significant yield losses.

“You need almost perfect weed control to avoid yield losses in hot, dry conditions. Unfortunately, we have a lot of weed escape in soybean,” says Marty Williams, USDA-ARS ecologist, affiliate professor in the Department of Crop Sciences at Illinois, and co-author on a new study in Science of the Total Environment.

Crucial as it may be, achieving complete weed control with existing chemical tools is increasingly difficult, given the increased frequency of herbicide resistance in major weed species such as waterhemp, Palmer amaranth, and others.

“We’ve got to bring weed populations as close to zero as we can, but we have to stop thinking only chemically. We’re not going to be flooded in the marketplace with new active ingredients. Resistance issues are going to continue to escalate; it’s not going to go away,” says study co-author Aaron Hager, associate professor in Crop Sciences and faculty Extension specialist.

Not surprisingly, the study found the combined effects of imperfect weed control, heat, and drought were most damning at seed fill.

“The sensitive seed-fill stage comes at a time of the season when we’re projected to have warmer temperatures and perhaps some of the greatest risk of dry conditions,” Williams says. “Plus, certain weeds thrive in such conditions. So, there is reason for concern.”

“While not as susceptible as the reproductive stages, soybean vegetative growth is affected by drought stress and significant yield damage can occur if the stress is severe enough. In our study, prolonged aridity during the early vegetative growth stages caused an average 958 kilograms per hectare (14.2 bushels per acre) reduction in yield,” he says.

Taken together, these patterns suggest soybean farmers need to achieve the highest levels of weed control all season long.

“Traditionally, we assume soybean can handle weed interference for a bit longer than corn. But given resistance and now these data showing the effects of the changing climate, we continue recommending soybean farmers use a soil-residual herbicide applied at the full labeled rate,” Hager says.

But herbicides alone won’t cut it.

“We need to think about other technologies, non-herbicide options, that could help us try to maintain a high level of control with resistant weeds. Very few foliar-applied herbicides are going to solve this problem. So, here’s your warning ahead of time,” Hager adds.

Landau says later-maturing soybeans might be useful as part of an integrated weed management strategy to reduce the risk of incomplete weed control in a more variable climate. His analysis showed maturity groups 3.6 and higher had an average of 16% less yield loss than earlier maturity groups.

“They may have an advantage over certain species because they sometimes compete better for light and water,” he says. “Later maturity groups won’t solve the problem alone, but they’re among the tools that may be useful to adapt to a changing climate.”

“We need to diversify how we manage weeds, particularly with the soaring cost of herbicides and the fact that they are no longer effective on some species. We’ll either adapt or be adapted,” he says.