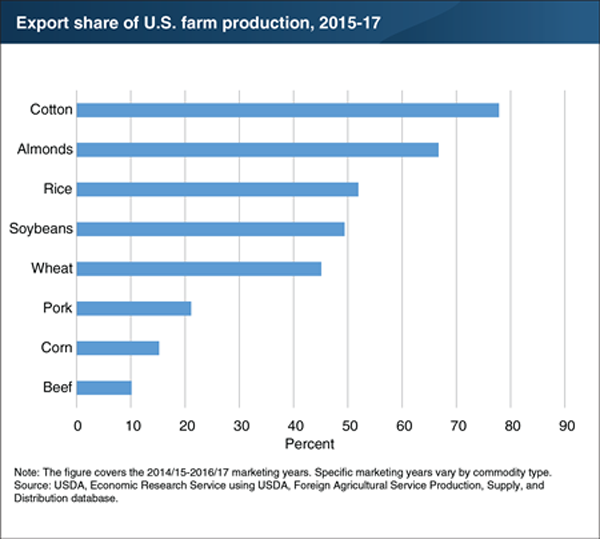 Exports are important for U.S. agricultural producers, as they make up a sizeable share of the market for many commodities.

In the case of cotton and almonds, the United States sends more of its product abroad than it consumes domestically.

Nearly 78 percent of all U.S. cotton is exported, with the bulk going to countries in North and Central America, including Canada, Mexico, and Nicaragua.

U.S.-produced almonds, grown almost exclusively in California, constitute nearly 80 percent of the global supply and are shipped worldwide, with 67 percent of production exported.

Rice, soybeans, and wheat also depend heavily on export markets, with about half of domestic production destined for non-U.S. markets.

The wealth of cropland throughout the Midwest and other parts of the United States gives domestic suppliers the capacity to scale production beyond the needs of the domestic market, allowing agriculture’s share of the U.S. economy to grow.

This chart appears in the ERS publication Selected charts from Ag and Food Statistics: Charting the Essentials, October 2018.