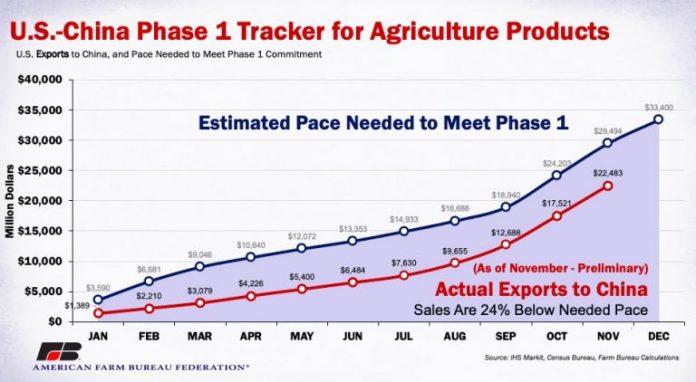 Last week, Bloomberg News reported that, “China is far away from meeting its U.S. trade-deal commitments, with the latest data showing it’s imported just over half of the American goods it promised to buy in the first year of the phase-one agreement.

In the first 11 months of the year, China purchased about 50.5% of the total 2020 target of $172 billion, according to Bloomberg calculations based on figures from the nation’s Customs Administration. The trade pact was signed between the two countries on Jan. 15.

The Bloomberg article added that, “As of the end of November, China purchased 54.1% of targeted manufactured products, 52.9% of agricultural goods and 31.1% of energy products.”

Meanwhile, a separate Bloomberg News article reported recently that, “China’s soybean imports will probably surge above 100 million tons in 2020-21, smashing the previous high set in the last marketing year, as local crushers ramp up capacity to take advantage of the country’s burgeoning demand for animal protein.

Imports from the U.S. may more than double to 36 million tons amid expectations of lower output from South America, Shi Yongge, general manager of state-owned Jiusan Group, told a conference in Guangzhou.

“The increase in purchases is also part of China’s efforts to meet its Phase One trade deal with the U.S., he added.”

With respect to Chinese corn imports, Financial Times writer Emiko Terazono reported last week that, “China has been a particularly big buyer of everything from corn to rice. The country’s authorities used their reserves to damp down price increases during the pandemic and are replenishing their strategic stockpiles. A recovery in the hog herd after the devastation caused by African swine fever has also meant a rebound in grains used for livestock feed.

“In the corn market, for example, the US Department of Agriculture’s Beijing bureau recently more than tripled estimates for China’s imports in the 2020-21 crop year from 7m tonnes to 22m. Due to the low level of state reserves, ‘substantial corn imports will be necessary to meet demand while also controlling further price increases and maintain stocks throughout 2021,’ it said.”

Looking ahead, Reuters News reported on Monday that, “China will increase the area sown with corn in its main grain regions this year, the agriculture minister has said, reversing several years of declining acreage in response to a growing shortfall.

“The expansion is part of a comprehensive plan to ensure food security, according to Tang Renjian, the newly appointed Minister of Agriculture and Rural Affairs, state media Xinhua news agency reported.

“Authorities will focus on expanding corn acreage in the northeast as well as areas around the Yellow, Huai and Hai rivers, Tang said in an interview with Xinhua on Sunday.”

The Reuters article noted that, “China will stabilize soybean output and secure domestic supplies of soybeans for food use, Tang added.”

And on Sunday, Bloomberg News explained that, “China’s local production has been unable to keep pace with its burgeoning demand for animal feed as its hog population rebounds faster than expected from African swine fever. Imports soared in 2020, and there are expectations that China is on its way to become the world’s largest corn buyer, just like soybeans, where the nation currently imports about 60% of global trade.”