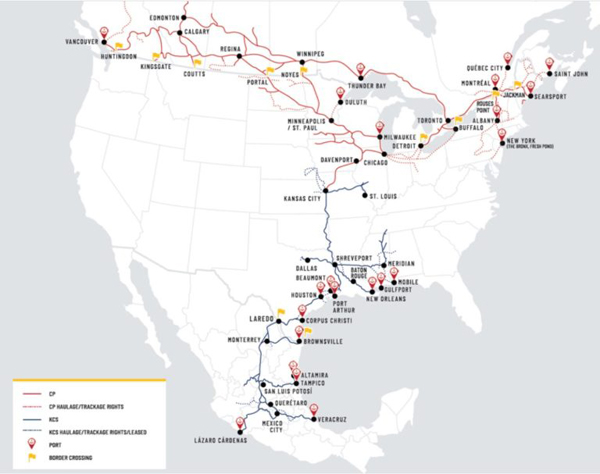 On March 21, 2021, Canadian Pacific (CP) Railways announced a $25 billion plan to merge with Kansas City Southern (KCS), calling it a “transformative” remake of the freight-rail industry. The proposed new railroad would be the first U.S.-Mexico-Canada-linked rail line.

The proposed rail merger of Canadian Pacific and Kansas City Southern would create a new rail system linking Canada, the United States and Mexico. Map: Canadian Pacific.
Not to be out-done, Canadian National Railway (CN) began talks with KCS in late April, saying it could yield a “superior” rail merger proposal and offering $30 billion for KCS compared to CP’s $25 billion.

Wheat is Watching
The U.S. wheat industry is closely watching both proposals but has not taken a position in support of or opposition to either proposed merger. U.S. Wheat Associates (USW), along with a coalition of shippers, has asked the Surface Transportation Board (STB), which regulates U.S. rail service, to apply its most strict standard of “enhances competition” to both proposals.

Also in April, however, the STB granted a waiver to CP that exempted its proposal from that high standard established in 2001. That ruling effectively lowered CP’s burden for winning the deal. The STB defended its decision noting that because the combination of CP and KCS would be the smallest of the large North American railroads, it would “result in the fewest overlapping routes.”

A Dissent
However, one STB member, Robert Primus, dissented in part, saying, “Special treatment for this proposed merger between Class I [railroads] runs counter to the Board’s responsibility to review such major mergers and protect the public interest.”

While the STB waived CP’s proposal from that standard, it has not yet ruled on the CN proposal. However, CN’s effort to brand the merger as enhancing competition has received over 600 letters of support.

USW’s desire to see increased rail competition in these merger proposals is directly related to their potential effect on U.S. wheat export prices.

U.S. railroads are a crucial part of the most efficient grain supply system in the world. The rail system fulfills an essential logistical function that neither grain handlers nor farmers can perform on their own. Wheat must compete for limited rail capacity with other grains as well.

USW, however, has learned that since June 2014, the cost of wheat shipments has increased substantially, due at times to higher basic rates for shipping wheat and other rail pricing strategies. For Mexican wheat buyers who bring in more than 60% of their total U.S. imports directly by rail, rates have a significant, direct impact on their bottom-line costs.

As rail costs increase, grain handlers may try to recover these costs by offering higher grain prices to terminal or export elevators and, as some in the industry believe, by offering lower prices to farmers. As basis increases, overseas buyers must pay more for all classes of wheat, and that affects demand.

While it is unlikely these proposed rail mergers would make Canada more competitive in Mexico due to long shipping distances, Canada’s history of nationalism in rail policies is concerning as it favors only some shippers. It is also possible a merger would increase Canada’s competitiveness in the U.S. domestic market, while the Canadian industry continues benefitting from an archaic, government mandated variety registration system that helps minimize any large-scale U.S. wheat imports north.

Next Steps
The KCS’s board of directors must next decide if they want to accept one of the rail merger proposals. In the meantime, the STB will review the proposed mergers.

In response to the impacts of increasing rail rates on our export competitiveness, USW formed a Wheat Transportation Working group in 2018. The group is currently working with researchers on scenarios that will help identify potentially positive or negative outcomes that could result from a merger. The STB is likely to seek public comments on the final rail merger proposals later in 2021 and the Wheat Transportation Working Group will weigh in on behalf of U.S. wheat farmers.