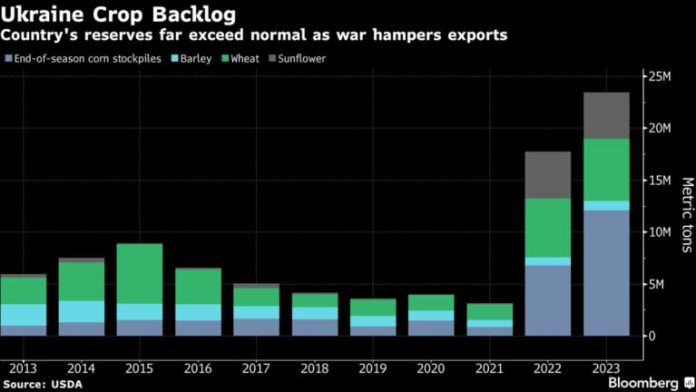 Reuters writer Michelle Nichols reported yesterday that, “U.N. aid chief Martin Griffiths said on Thursday he was hopeful that the first shipment of grain from a Ukrainian Black Sea port could take place as early as Friday, but ‘crucial‘ details for the safe passage of vessels were still being worked out.

“Griffiths said Turkish, Russian and Ukrainian military officials were working with a U.N. team at a Joint Coordination Center in Istanbul to hammer out standard operating procedures for the deal agreed by the four parties last Friday.”

The Reuters article noted that, “He acknowledged that ‘the devil was in the details,’ but said so far no major issues had emerged. Griffiths said one aspect being negotiated is the exact coordinates of the safe shipping channels.”

And today, Reuters News reported that, “Ukrainian President Volodymyr Zelenskiy said on Friday his country is ready to start grain shipments from Black sea ports and is awaiting a signal from the United Nations and Turkey to start the shipments.

“Zelenskiy’s office said the president had visited the Black Sea port of Chornomorsk, which has been blockaded by Russia, to see preparations for the shipments under a U.N.-brokered agreement signed in Turkey last week.”

“Crop traders are watching closely for tangible progress toward unlocking the millions of tons of grain that have been piling up in Ukraine since ports were closed following Russia’s invasion in February. It’s been a week since the two sides signed a landmark deal to restart shipments, but there are few details about how and when the shipments are likely to start.”

“Ukraine, a major global grain grower and exporter, harvested a record 86 million tonnes of grain in 2021,” the Reuters article said.

And New York Times writer Liz Alderman reported today that, “A small army of combine harvesters rolled across an endless farm field on a recent afternoon in western Ukraine, kicking dust clouds into the blue sky as the machines gathered in a sea of golden wheat. Mountains of soy and corn will be reaped in coming weeks. It will all add to a 20-million-ton backlog of grain that has been trapped in Ukraine during Russia’s grinding war.

“Under a breakthrough deal brokered last week by the United Nations and Turkey, Moscow’s blockade of Ukraine’s grain shipments through the Black Sea would be lifted.

If all goes to plan, a vessel loaded with grain will sail from a Ukrainian port in coming days, releasing harvests from a major breadbasket to a hungry world.

“But despite fanfare in Brussels and Washington, the accord is being greeted cautiously in the fields of Ukraine. Farmers who have lived for months under the risk of Russian missile attacks and economic uncertainty are skeptical that a deal will hold.”

The Times article indicated that, “A missile strike on Saturday that hit Odesa, Ukraine’s biggest Black Sea port, jolted confidence in the deal and risked undermining the effort before the agreement could even be put into action.”

Alderman explained that, “Ukraine’s farmers are grappling with vast amounts of trapped grain from last year’s harvests. Before the war, new crops moved in and out of grain elevators — from harvest to export — like clockwork. But Russia’s Black Sea blockage created a massive pileup.

“An additional estimated 40 million tons — of wheat, rapeseed, barley, soy, corn and sunflower seeds — is expected to be harvested in the coming months. Storage facilities not destroyed by Russian shelling are filling up, and room is growing scarce for the freshly reaped crops.”

Elsewhere, Bloomberg writer Kim Chipman reported today that, “The US is poised to deliver a bumper spring wheat crop in the upcoming weeks, which if realized could help relieve global shortfalls caused by turmoil in the Black Sea.

“Fields in North Dakota, the top producing US state, are forecast to yield a record high 49.1 bushels per acre of the grain, according to the final estimate of a three-day crop tour led by the Wheat Quality Council. North Dakota makes up about half of the US’s spring wheat crop.”