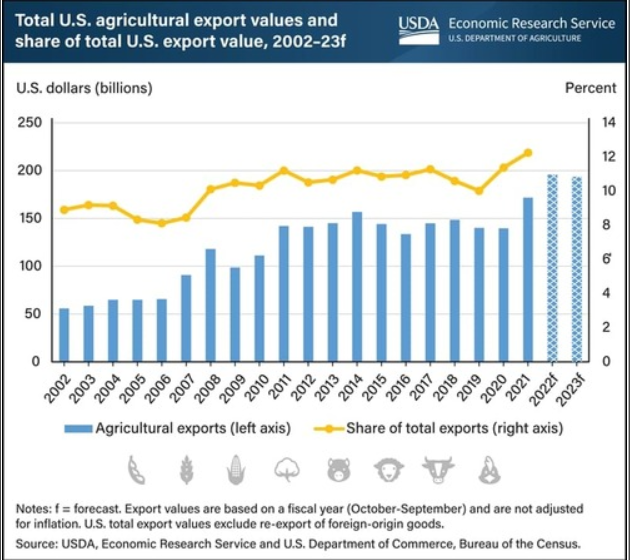 Between fiscal years 2002 and 2021, the value of U.S. exports of agricultural products rose by an average of 11 percent annually, exceeding the overall rate of increase for total U.S. exports. In 2021, agricultural exports accounted for 12 percent of the total value, up from 9 percent in 2002. Growth in agricultural exports has largely been resilient to market shocks associated with the Coronavirus (COVID-19) pandemic.

Even as total U.S. exports fell by 12 percent during COVID-19’s onset in fiscal year 2020, agricultural exports remained steady on the strength of surging shipments of soybeans, corn, and pork to China. In 2021, total U.S. exports rebounded by 14 percent as global demand recovered and trade restrictions were relaxed. However, exports of agricultural products surged 23 percent to $172 billion on increased demand for grains and feed, followed by oilseeds and animal products. Much of this demand came from China, but also Mexico and Canada, consistently among the top three importers of U.S. products.

While China’s demand for U.S. soybeans, corn, and other feed products rose because of its hog sector rebuilding from the African swine flu outbreak, agricultural exports to Mexico and Canada were bolstered by their growing livestock and poultry sectors, integrated supply chains, and the ratification of the United States-Mexico-Canada Agreement (USMCA). Led by increases in corn, cotton, and soybean shipments, agricultural exports are forecast to reach a record $196 billion in FY 2022 and are projected to remain strong at $193.5 billion in FY 2023.