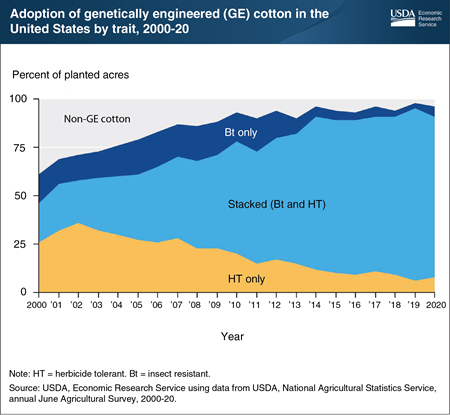 HT crops can tolerate one or more herbicides and provide farmers with a broad variety of options for effective weed control by targeting weeds without damaging crops.

Bt crops contain genes from the soil bacterium Bacillus thuringiensis and provide effective control of insect pests, such as the tobacco budworm and pink bollworm.

GE varieties of cotton were commercially introduced in the United States in 1995. GE seeds have accounted for the majority of cotton acres since 2000, expanding from 61 percent of acreage that year to 96 percent in 2020.

During this time, the share of cotton acres planted with seeds that had the individual HT or Bt traits shrank as growers turned more often to stacked varieties that carried both traits. In 2000, about 26 percent of total cotton acres were HT only, 15 percent were Bt only, and 20 percent used stacked seeds.

By 2020, 8 percent of acres were HT only, 5 percent were Bt only, and 83 percent used stacked seeds. This chart appears in the December 2020 Amber Waves article, “Use of Genetically Engineered Cotton Has Shifted Toward Stacked Seed Traits.”