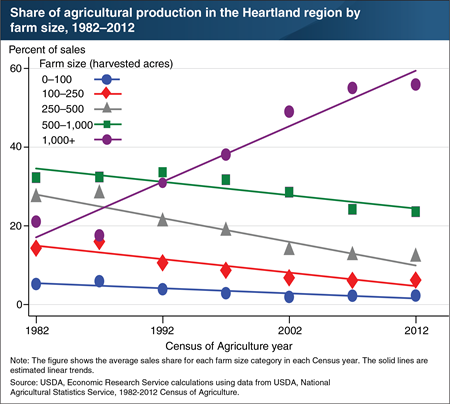 Past ERS research on consolidation in the U.S. farm sector has documented a widespread shift in agricultural production to large-scale operations.

This structural change has likely been partly driven by productivity advantages enjoyed by larger operations.

In contrast, over the same period, the share of total production declined for the four smaller farm size categories.

In aggregate, the productivity of crop farms in the Heartland region increased by 64 percent, or 1.5 percent per year, between 1982 and 2012.

ERS researchers estimate that about one-sixth of this productivity growth was attributable to the shift in production to larger farms.

This chart appears in the December 2018 Amber Waves feature “Productivity Increases With Farm Size in the Heartland Region.”