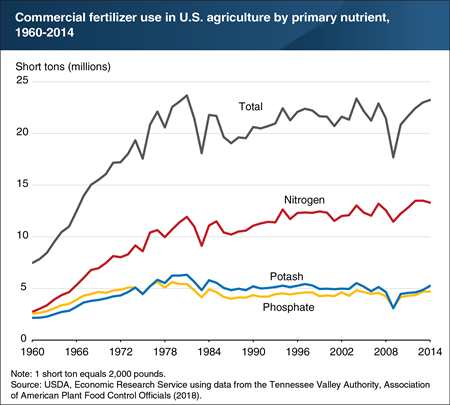 Fertilizers provide nutrients (such as nitrogen, potash, and phosphate) essential in the production of crops.

The total consumption of fertilizers grew rapidly throughout the 1960s and 1970s, as U.S. farmers devoted more acreage to crop varieties and hybrids (such as corn and wheat hybrids) that respond well to more intensive use of commercial fertilizer, especially nitrogen.

After 1981, total fertilizer use fluctuated from year to year but displayed no trend, as modest growth in nitrogen use was offset by modest declines in potash and phosphate.

Higher fertilizer prices limited use to some extent, while higher crop prices encouraged greater fertilizer use.

Finally, macroeconomic events can affect use: for example, fertilizer use dropped in 2009, concurrent with the Great Recession.

This chart appears in the ERS data product Fertilizer Use and Price, updated February 2018.