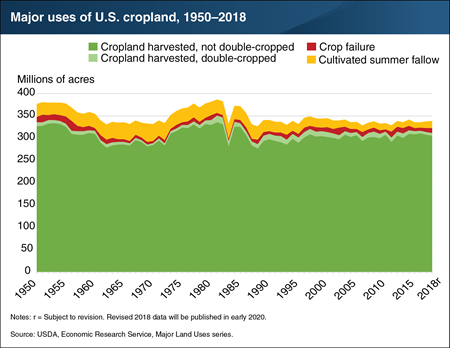 A 2-million-acre increase in crop failure due to drought conditions in several crop-producing areas contributed to the 2018 decline in cropland harvested. Land used for cultivated summer fallow, which primarily occurs as part of wheat rotations in the semi-arid West, also increased by 1 million acres to 16 million acres, continuing the reversal, which began in 2017, of a long-term decline in this category.

The area that was double-cropped (i.e., two or more crops harvested) held constant over the previous year at about 6 million acres.