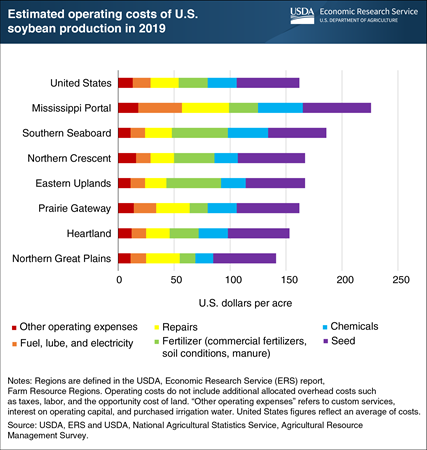 To produce soybeans on one acre of U.S. farmland in 2019, a producer would have spent $162 on average on expenses such as seed, fertilizer and fuel.

These expenses, known as operating costs, can vary noticeably by region.

Operating costs for soybeans are estimated to be highest in the Mississippi Portal region ($226 per acre) and lowest in the Northern Great Plains region ($141 per acre).

The high operating costs in the Mississippi Portal region are driven in part by costs associated with irrigation-high repair costs and high fuel, lube, and electricity costs.

The Mississippi Portal region irrigates a larger percentage (50 percent) of its soybean acres than any other region; second highest is the Prairie Gateway region (21 percent irrigated), which has the second highest costs for those two categories of expenses.

The Mississippi Portal region also has the highest chemical ($40 per acre) and seed costs ($61 per acre) of any region. Operating costs are lowest in the Northern Great Plains region mostly because it has particularly low expenses for chemicals ($16) and fertilizer ($14).

This chart is derived from data collected from the USDA, Economic Research Service (ERS) Commodity Costs and Returns data product.

The data also can be viewed via ERS’s interactive data visualization product, U.S. Commodity Costs and Returns by Region and by Commodity. 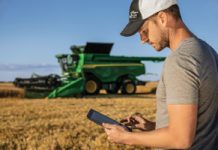