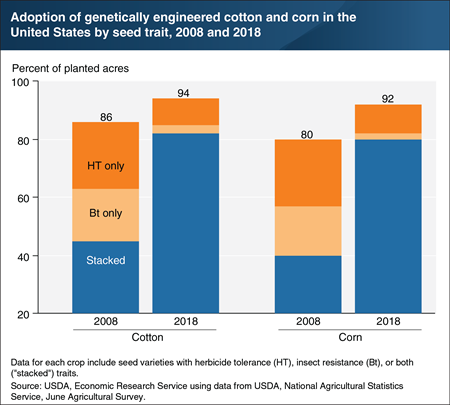 Currently, over 90 percent of corn, cotton, and soybean acreage in the United States is planted with genetically engineered (GE) seeds.

Most of these GE seeds are either herbicide tolerant (HT) or insect resistant (Bt).

Seeds that have both HT and Bt traits are referred to as “stacked.”

Soybean seeds with stacked traits are currently not commercially available in the United States.

Adoption rates for stacked seeds have slowed in recent years.

The slow growth rates for stacked seeds may be due to relatively low corn prices, or because the majority of GE seeds are already stacked.

This chart is drawn from the ERS data product Adoption of Genetically Engineered Crops in the U.S., updated July 2018.