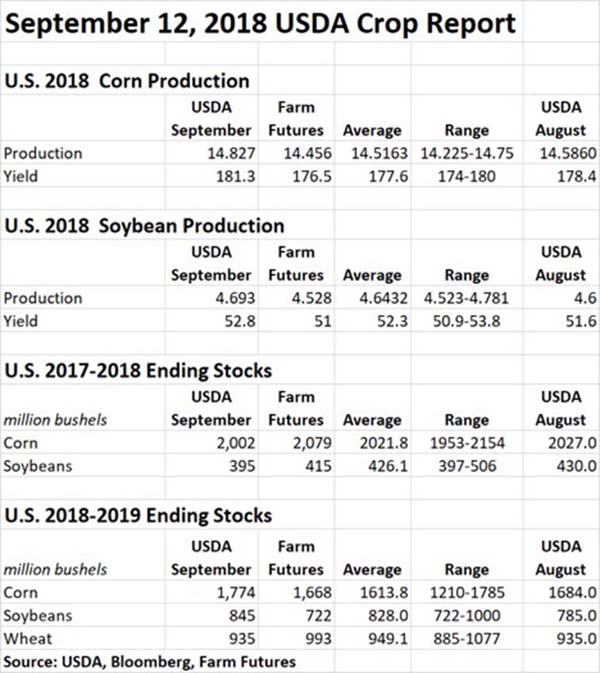 Grain futures were lower after bearish USDA production, supply and demand reports this morning for corn and soybeans, with the government projecting larger than expected yields. Soybeans were able to reverse higher on hopes for renewed trade talks with China.

“USDA’s reports again put the market on the defensive with yields that were higher than expected for both corn and soybeans,” says Farm Futures senior grain market analyst Bryce Knorr. “Corn looks headed for a test of July lows, which would come in line with the typical cycle between bottoms for the market historically.”

For corn, USDA estimates higher domestic production, use, exports and ending stocks compared to its August projections. Total production is now estimated at 14.287 billion bushels, moving 241 million bushels higher from a month ago based on increased yield expectations. That dials in a per-acre average of a bin-busting 181.3 bushels per acre, well ahead of USDA’s August estimates of 178.4 bpa and average analyst estimates of 177.6 bpa (including a Farm Futures projection of 176.5 bpa).

If realized, those estimates clock the 2018 U.S. crop as the second-largest on record, thanks in part to record-high yield forecasts for Illinois, Indiana, Iowa, Nebraska, Ohio and South Dakota.

U.S. corn supplies also move higher, outpacing higher estimated exports and corn used from ethanol, to exceed August estimates by 25 million bushels. These factors and others have USDA moving the season-average price 10 cents lower to a midpoint of $3.50 per bushel.

“Healing for corn may take time to develop, because the huge increase in production should swamp cash markets where basis is already weak,” Knorr says. “Low prices should encourage exports but demand worldwide likely won’t be enough to sop up all the additional bushels.”

Even so, carryout leftover a year from now should be lower, Knorr adds. Plus, poor prices won’t encourage expansion in 2019, he notes. Those two factors could ultimately trim stocks.

For the time being, corn could depend on soybeans and wheat for direction, Knorr says. Wheat might not be able to assist much, unless dry conditions persist for seeding wheat in Europe. But soybeans – despite bearish fundamentals – could offer a lifeline if the U.S. can restart trade talks with China, he says.

USDA also projects a larger 2018 U.S. soybean crop versus its August estimates, with total production reaching 4.683 billion bushels on a per-acre yield average of 52.8 bpa – a record number, if realized. That’s also slightly higher than USDA’s August estimates of 51.6 million bushels, with analysts expecting the agency to peg yields at 52.3 bpa (including a Farm Futures estimate of 51 bpa).

On the demand side, USDA estimates unchanged exports and soybean crush moving 10 million bushels higher, leaving ending stocks at 845 million bushels – up 60 million bushels from August estimates. Those factors and others had the agency pushing down the season-average soybean price down another 30 cents at the midpoint, for a range of $7.35 to $9.85 per bushel.

Globally, 2017/18 ending stocks shifted from USDA August estimates of 95.6 MMT to 94.74 MMT. Analysts also expected a small decline, with an average guess of 95.5 MMT (including a Farm Futures estimate of 94 MMT).

What happens next? Knorr says fund short-covering could provide some stability while the market tries to untangle what’s going on with Chinese demand.

“USDA’s estimate of imports varies dramatically from the forecast out from China’s ag ministry today, and the outbreak of African swine fever further clouds the picture,” he says.

USDA tallied offsetting import and export changes for U.S. wheat, leaving domestic supply and demand estimates unchanged from August, for 2018/19 ending stocks of 935 million bushels. Analysts expected that number to drift higher, to 949.1 million bushels (including a Farm Futures estimate of 993 million bushels). USDA also left the season-average price midpoint unchanged, at $5.10 per bushel, although the agency narrowed its range by 20 cents per bushel to $4.70 to $5.50.

Global wheat supplies for 2018/19, in contrast, moved 4.7 MMT higher, factoring in higher production and higher beginning stocks. Increases from Russia and India more than offset decreased in Australia and Canada.