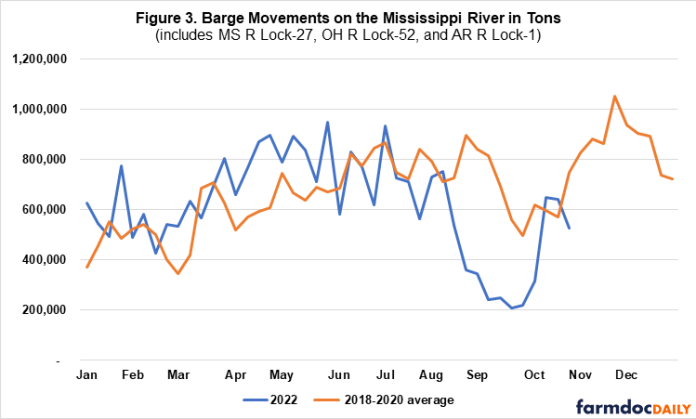 Grain barge movements are very volatile and it is difficult to assess the impacts of the low Mississippi issues. In USDA-AMS barge movement data we observe that the number of grain barges being unloaded in New Orleans through September and October were down significantly, approximately 20-30 percent lower than recent years.

The slowdown during this period coincides with river closures (McWhirter, 2022) and restrictions on barge companies that reduced the bar tow, normally 30-40 barges to 25 (Kennedy, 2022). Tonnage movement has been even weaker.

Since the beginning of September, tonnage going through Mississippi Lock-27, Ohio Lock-52, and Arkansas Lock-1 were down significantly, more than 40 percent lower than recent years. The more significant decline observed in tonnage would be consistent with reports of how barges have been forced to reduce draft.

Typically, barges are loaded to a 11-12 foot draft during the fall, but companies started imposing 9-foot barge draft restrictions in October, which can lead to a reduction of 10,000-15,000 bushels per barge (Wicks, 2022).

Tonnage appears to have picked up in early October following reports of river reopening and easing of backlogs (Cavaliere, 2022), but the most recent report (week of October 22, 2022), slowed down again relative to the three year average. We note that it is not easy to identify the impacts of the low Mississippi river issues on grain barge movements.

For instance, while we do see a significant slowdown in September, the slowing pace started declining back in August prior to the surge in barge rates. There could be other factors leading to the lower barge movement, such as grain supply and demand conditions. In later sections of this article, we will focus more of our analysis on basis effects to identify the impact of the disruptions.