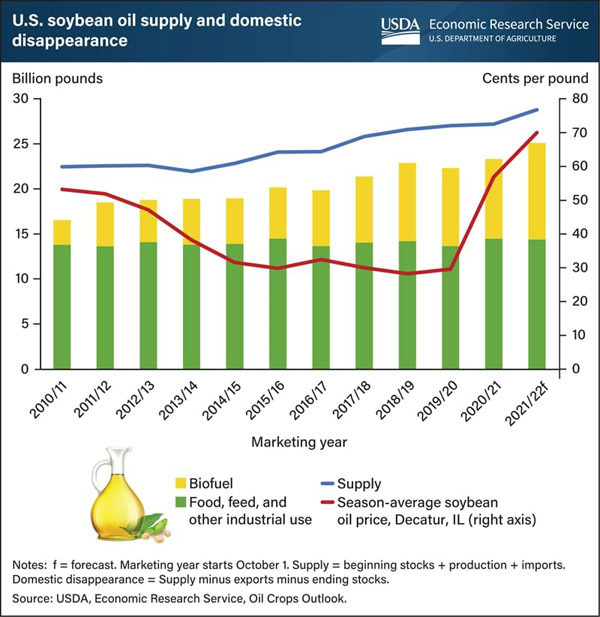 In the United States, soybean oil is frequently used for frying and making pastry crust flaky, among numerous other commercial food preparations. Soybean oil-produced by crushing soybeans and extracting the oil-is also used in the production of industrial products like fatty acid, animal feeds, biodiesel and increasingly, renewable diesel.

As the most widely used vegetable oil, soybean oil use has typically accounted for over 50 percent of total domestic disappearance of all vegetable oil used in the United States. In early 2021, demand for biofuels increased-driven in part by Federal and State biofuels policy. Given the versatility of soybean oil and the limited supplies of substitute oils such as canola, sunflower, and palm oil, steady growth in food and industrial demand for soybean oil has caused domestic prices to rise. In March 2022, USDA’s Agricultural Marketing Service reported that average monthly soybean oil prices in Decatur, IL-a leading indicator market for soybean oil-had reached 76 cents per pound, more than 40 percent higher than a year earlier.

Rising monthly prices have contributed to increases in the 2021/22 U.S. season-average soybean oil price, currently projected at $0.70 per pound, an increase of 23 percent, or 13 cents, from the prior marketing year. Higher prices have in turn supported increased soybean crush (processing) volumes. Consequently, domestic soybean oil supply is expected to grow to 28.8 billion pounds in 2021/22, up 6 percent from the year prior.