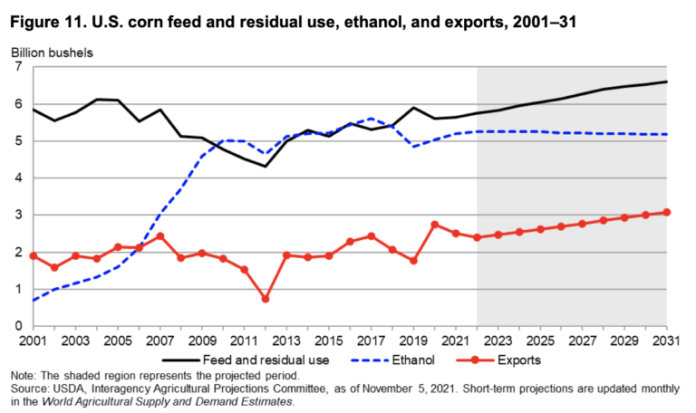 On Wednesday, the U.S. Department of Agriculture released its 10-year projections for the food and agricultural sector.

In part, the baseline update explained that, “The Agriculture Improvement Act of 2018 is assumed to remain in effect through the projection period. The projections are one representative scenario for the agricultural sector and reflect a composite of model results and judgment-based analyses. The projections in this report were prepared using data through the October 2021 World Agricultural Supply and Demand Estimates (WASDE) report, except where noted otherwise. Macroeconomic assumptions were concluded in August 2021.”

The report stated that, “The baseline projects U.S. corn production to grow over the next decade as yield gains offset a gradual decline in acreage. Planted area is projected to steadily decline after 2021/22’s strong response to increased global demand and tight supplies.”

“Through the baseline period, supply grows at a faster rate than use, resulting in a steadily increasing stocks-to-use ratio,” the report said.

With respect to ethanol, the report noted that, “Corn used for ethanol production declines slightly over the projection period, from 5.250 billion bushels to 5.175 billion by 2031/32. Expected declines in motor gasoline consumption constrains ethanol demand.”

Wednesday’s report noted that, “U.S. soybean plantings rebounded sharply in 2021/22 from the prior two years, with the area projected to remain elevated over the course of the decade. Plantings remain near 88 million acres, supported by high prices and net returns relative to much of the last 5-7 years.”

The update pointed out that, “Soybean oil use for production of biofuels increases from 8.8 billion pounds in 2020/21 to 15 billion pounds by the end of the projection period. Current policy is assumed, which is largely driven by soybean-oil based renewable diesel for the California market and substitution of renewable diesel for Fatty Acid Methyl Ester in all markets.”