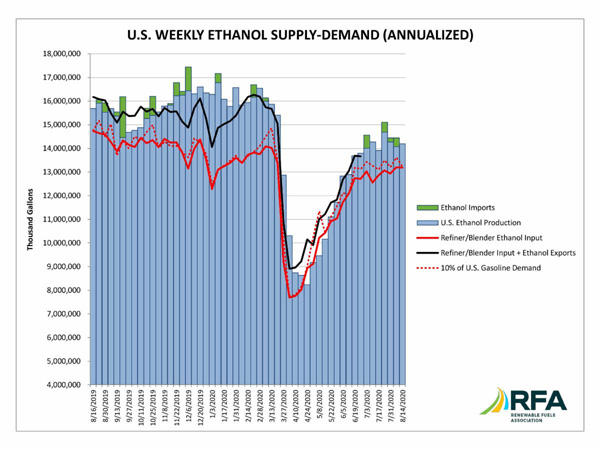 According to EIA data analyzed by the Renewable Fuels Association for the week ending August 14, ethanol production stepped up 0.9%, or 8,000 barrels per day (b/d), to 926,000 b/d-equivalent to 38.89 million gallons daily. Production remained 9.5% below the same week in 2019 as a result of the continuing effects of the COVID-19 pandemic. The four-week average ethanol production rate increased 0.4% to 933,000 b/d, equivalent to an annualized rate of 14.30 billion gallons.

Ethanol stocks grew 2.6% to 20.3 million barrels, which was 13.3% below year-ago volumes. Inventories drew down in the Gulf Coast (PADD 3) and West Coast (PADD 5) but increased across the other regions.

There were zero imports of ethanol recorded after three consecutive weeks of shipments on the books. (Weekly export data for ethanol is not reported simultaneously; the latest export data is as of June 2020.)