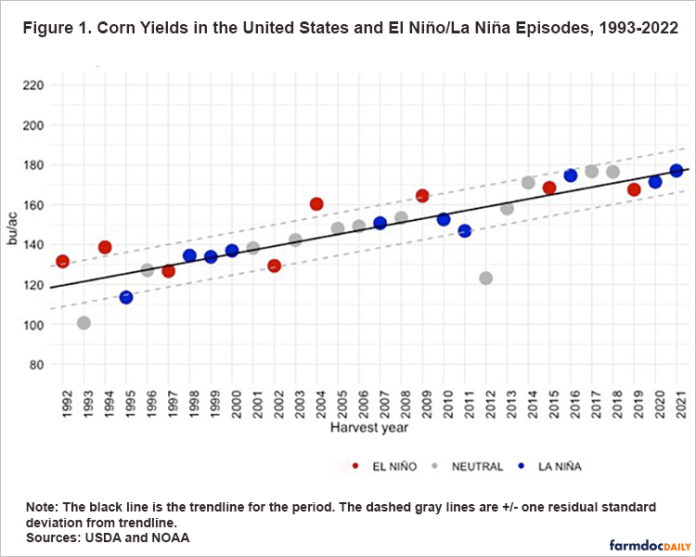 Figure 1 shows a slight relationship between ENSO phases and corn yield levels in the U.S., with most yields in El Niño years (red dots) above the trendline. If we focus on extreme values (residual standard deviation from trendline greater than one), note that all four very high yield levels happened in El Niño crop years (see the red dots in Figure 1) and none in a La Niña year. Also, two very low yield levels happened in Neutral years (1993 and 2012), and only one in a La Niña year (1995).

Meteorologists are forecasting a third consecutive year of La Niña. The occurrence of two successive La Niña winters in the Northern Hemisphere is common, however, having three in a row is relatively rare. A triple La Niña has happened only twice since 1950. The last time La Nina was in place for three years in a row was from 1999 to 2001. But what could this mean for corn production in Brazil, the United States, and Argentina? In the previous article, we presented descriptive analyses of deviations from the trendline of soybean yields over the last 30 years (see farmdoc daily, May 23, 2022). In this article, we made the same analysis to evaluate corn yields in the aforementioned countries. La Niña is expected to weaken but persist through the Northern Hemisphere summer and into early winter 2022-23.

La Niña and El Niño are phases of the El Niño–Southern Oscillation (ENSO) that typically occur every two to seven years, with neutral years in between. La Niña tends to create drought and dry conditions in many parts of the world, including southern Brazil, Argentina, and the U.S., while bringing additional precipitation to other areas, such as across northern Brazil. Current dry conditions in the U.S., for example, can reduce the productive potential of summer crops planted this year.

The Pacific Ocean has been in a La Niña phase for the last two years. The first occurred from late August 2020 to April 2021. This was followed by the current La Niña, which started in August 2021 and is still underway. La Niña is favored to continue into the Northern Hemisphere late summer (52% chance in July-September 2022, according to the Climate Prediction Center (CPC/IRI) Official Probabilistic El Niño-Southern Oscillation Outlook, July 5, 2022.

Corn Yields in the U.S.

In Brazil, with 28% of the second corn crop (safrinha) area harvested by the first week of July, total production is expected to reach a record of 4.55 billion bushels, according to the National Supply Company (Conab). This production is 33% higher than last season’s 3.43 billion bushels, when Brazil was affected by a severe drought. The expected yield is 85 bushels per acre, 22% higher than last season. In addition to the expected good yields, despite less than ideal weather, an 8.6% increase in planted area is another factor that will help Brazil break records with this season’s production. The safrinha harvest started in June and will continue through September (see farmdoc daily, June 15, 2022).

Brazil had very different results in corn yields during the last two La Niña years (see the last two blue dots in Figure 2). While in 2020/21 yields were 17 bushels per acre below trend (-20%), in the current 2021/22 season, the average corn yield was 2 bushels per acre below trend (-2%). This disparity can be explained by climate differences within Brazil and the wide distribution of first and second corn crops. Therefore, depending on the period of La Niña presence and strength of the phenomenon, yield declines in drought-affected states can be offset by gains in other states. More than 70% of the corn produced in Brazil is from the safrinha, planted mainly in the Midwest and Northeast – where La Niña events favor increased rain. On the other hand, the first corn crop is grown primarily in the Southern states – where La Niña events tend to decrease rainfall. In addition, the time season from the first and second corn crop are different. 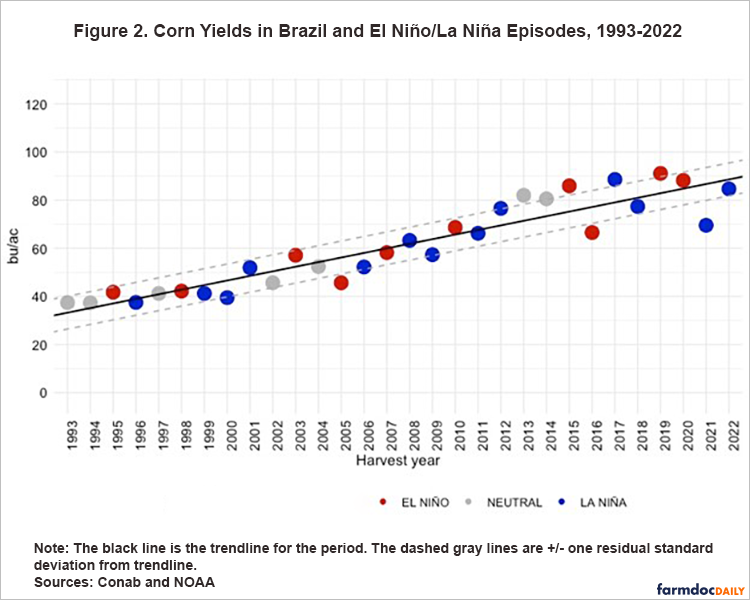 With 78% of the 2021/22 corn being harvested by July 7, according to the Ministry of Agriculture, Livestock and Fisheries in Argentina (MAGyP), production estimates are 1.93 billion bushels, stated by Bolsa de Cereales of Buenos Aires. The estimated yield is 13% below the previous harvest due a severe draught during the summer.

During the previous harvest under La Niña conditions, corn yields were 2.8 bushels per acre (-2%) below the trendline, and the current harvest yields, in a second consecutive La Niña, are 17.5 bushels per acre (-14%) below trend (see last two blue dots in Figure 3).  In these two crop seasons, precipitation was below average at the beginning of the summer in Argentine Pampa (Buenos Aires, Córdoba, Entre Rios, La Pampa, and Santa Fé states), which provides 80% of corn production in the country. 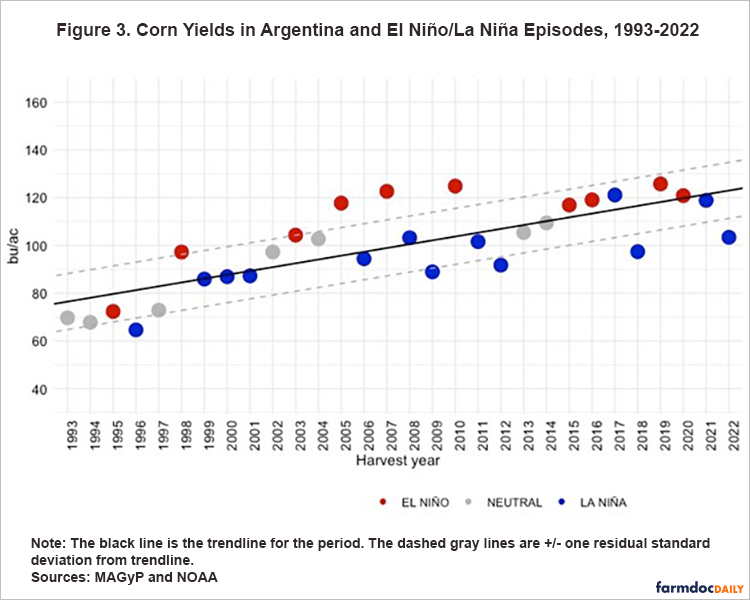 Figure 3 shows a relationship between ENSO phases and corn yield levels in Argentina. The majority of the yields in El Niño years (red dots) are above the trendline and the majority of yields in La Niña years (blue dots) are below the trendline. This pattern reflects the relationship reported in different studies (Iizumi et al., 2014; see farmdoc daily, December 17, 2020): the negative effect of La Niña and the positive effect of El Niño on corn yields in Argentina.

If we focus on extreme values (residual standard deviation from trendline greater than one), note that all very high yield levels happened in El Niño crop years (red dots). Also, all low yield levels happened in La Niña (blue dots) crop years. These data suggest a very low probability of having very high yields in La Niña years and very low yields in El Niño years. Also note that in four out of five two consecutive La Nina events corn yields have a negative standard deviation greater than one. However, the last time three consecutive La Niñas occurred (1999-2000-2001), the yields were just on the trendline.

Over the last 30 years, the data show a strong relationship between ENSO episodes and corn yield levels in Argentina, a very weak relationship in the U.S., and no relationship in Brazil. It is important to note that each La Niña event will have different outcomes, therefore, they will present benefits to some agricultural producers while harming others.

Cabrini, S., J. Colussi and G. Schnitkey. “Third Consecutive La Niña? What to Expect from Soybean Yields in the United States, Brazil and Argentina.” farmdoc daily (12):75, Department of Agricultural and Consumer Economics, University of Illinois at Urbana-Champaign, May 23, 2022.

Irwin, S. “The Impact of Preseason La Niña Episodes on Corn and Soybean Yields in Brazil and Argentina.” farmdoc daily (10):213, Department of Agricultural and Consumer Economics, University of Illinois at Urbana-Champaign, December 17, 2020.