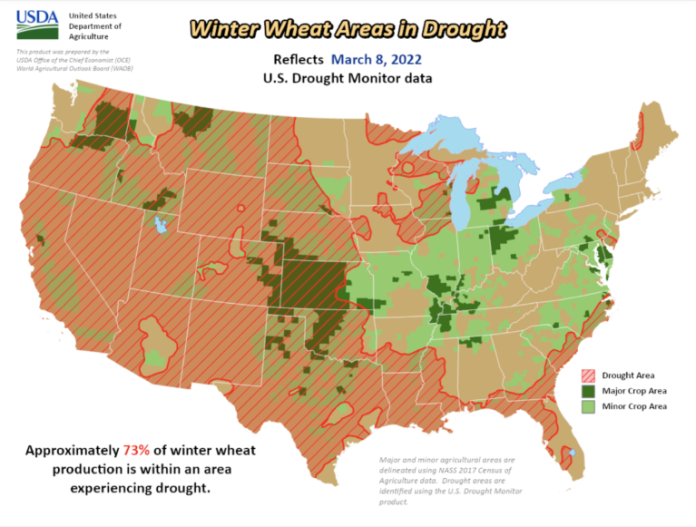 Smith explained that, “Chicago wheat rose as much as 3.8% earlier after Interfax initially reported Russia was considering a wider ban on exports. Interfax later specified the ban would only cover exports to the Eurasian customs union.”

The Bloomberg article added that, “Although Russia is past its seasonal wheat-export peak, it had about 8 million tons left to ship between March and June, the United Nations estimated last week.”

Has Russia introduced a #wheat export ban? No. But this story is not over. Andrey explains why.#oatt pic.twitter.com/WvkAfovsAD

The turmoil in the global wheat market has abated somewhat, with traders seeking more clarity on supplies from the crucial Black Sea region as Russia’s war in Ukraine rages on.

“About 28 vessels left Russian ports as of last week, carrying about 350,000 tons of staple crops, like wheat, compared with 50 vessels the prior week, according to Nabil Mseddi, chief executive officer of Geneva-based AgFlow, which focuses on collecting, aggregating and redistributing agricultural data. Vessel traffic at Ukraine’s ports remains at a standstill.”

Poole added that, “In war-ravaged Ukraine, a major grower of grains and sunflower, farmers may plant almost 40% less than a year earlier, consultant APK-Inform said in a note, citing a preliminary estimate. Still, sowing is unable to start in many key regions and supply-chain disruptions will hamper planting and yields, it said.”

Also yesterday, Dow Jones writer Kirk Maltais reported that, “Also applying pressure on grains Monday is the sentiment among some traders who are questioning how much the disruption of war in Ukraine will really impact the availability of grain in the region, as well as the flow of exports out of Black Sea ports.”

Reuters News reported today that, “Russia said on Tuesday there was no risk of a food shortage on the domestic market and cautioned consumers against rushing out to stock up on staples after the West slapped sanctions on Russia for its invasion of Ukraine.”

Meanwhile, Bloomberg writer Jonathan Gilbert reported that, “Argentina has blocked agriculture traders from registering cargoes of soybean meal and oil for export, a move it usually makes before hiking taxes on shipments, amid expectations that the government will seek to tap the global rally in crops.

“Argentina is the biggest exporter of soy meal for livestock feed and soy oil for cooking and biofuels. Farmers in the South American nation start harvesting beans at the end of the month, with the bulk of fieldwork done in April and May. Ukraine is a top global supplier of a competing oil made from sunflowers.”

“Some farmers in southwestern Kansas, the top U.S. wheat producing state, have not received much measurable rain or snow since October. Winter wheat is planted in autumn, lays dormant in winter and begins sending up green shoots in spring. Proper soil moisture is critical at this stage for the crop to thrive.”

Plume pointed out that, “Meanwhile, the winter wheat crop in China, the world’s largest producer of the grain, is expected to be among the worst ever after heavy rainfall delayed planting.”

And Reuters writer Julie Ingwersen reported yesterday that, “The U.S. Department of Agriculture’s (USDA) National Agricultural Statistics Service in a weekly crop report on Monday rated 23% of the Kansas winter wheat crop in good to excellent condition, down from 24% a week earlier.”

“For Oklahoma, the USDA rated 24% of the winter wheat crop in good to excellent condition, up from 15% a week earlier.”

“For Colorado, the USDA rated 18% of the winter wheat as good to excellent, a decline from 21% in the state’s previous report, released in late February,” the Reuters article said.

Also yesterday, Reuters writers Muyu Xu and Dominique Patton reported that, “China has started the release of more than 3 million tonnes of fertilisers from its commercial reserves in March for spring farming, its state planner said on Monday.”